i’ve been quite the boringly busy blogger this year, haven’t i?
constantly apologising for blogging about things way after they’ve passed.
so ’tis with the end of the residency at collingwood housing estate.
as the end of the residency loomed,  i really wasn’t sure the best way to ‘mark’ the occasion. my initial idea was to put on a concert, with the local band, some experimental music peeps and some vocal groups from the local area.
whilst i don’t think it’s a stupid idea, the failure of the movie night helped me realise that my resources (time, money, skllls and patience) were too limited to be able to pull of something like that on the estate. and it just felt like i was going to make a work that kinda failed.
so i cancelled the tentative plans i had made, but that left me with a bit of a hole in my plans and a sense of impending anticlimax.
thankfully i was able to chat about it with sue kent, the administrator and person who started collingwood neighbourhood house. she suggested, very sensibly, that i join the community safety day which was planned for the weekend after our conversation. it was a super-quick turnaround, but a great idea: the community would be out, it was going to add to a  sense of safety and awareness (listening, that is), and i’d be included in an event that already had community support, promotion and context. perfect.
the only problem was the i wasn’t sure the best way to include some of the art community in that end-of-residency rah-rah. it wasn’t a sexy event and i also didn’t feel like making into a typical art event with a bunch of artists who aren’t really into community-engaged practice.
thankfully my friend lucas came to the rescue – he suggested exactly the right thing, which resulted in two quite private tours for invited arty guests as well as members of the estate. perfect.
finishing touches 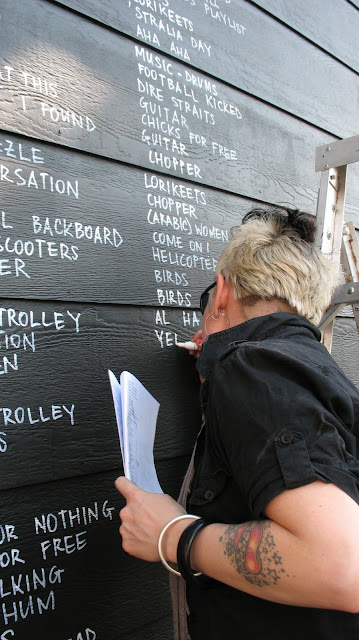 having brought my finale 10 days forward, i had to work really hard to bring everything to completion, but thankfully i just put my mind to it, and employed an assistant. mark, a local in transitional housing and main guy for the men’s shed was my assistant for the week and he was amazing. he helped me put together the listening booth and string up all the wiring for the underground sound listening stations.
i worked my arse off writing up the sound wall, compiling the CD, getting maps printed and sorting out the logistics of inviting people to a one-off tour. all whilst  talking to loads of people from the area about what was happening. it was pretty intense, but amazing week. and it was really satisfying. those posts about each of the artworks will give you an idea of the meta processes of the whole work, but the overall fervent activity about all the works really brought everything together and did make it feel like a finale. the locals got a sense of what i was doing, and i started to see what my work was about and how it fit.
the listening booth and tours of the housing estate thankfully the listening booth was the perfect device to bring all the works together on the one day.
i gave out CDs, maps to the estate and it was a great site from which to leave the tours.
the tours were great! a really nice mix of locals and arty-visitors and each person took something different away about the residency and the estate itself.
each group started with underground sound listening stations, to the sound wall, through one of the tower foyers and back to harmsworth park. i spoke a little about my experience on the estate, some about the work, about the significance of the places we passed (including the neighbourhood house and the DHS office0  the first group was overflowing, with quite a lot of the local peeps joining in (including a couple of kids) and we were treated to an outstanding tirade about public housing by a resident as we passed through the foyer of 229.
the second tour was slightly smaller, but later in the day. it was still a great little tour and some great questions asked about the nature of sound on the estate. I think most of the visitors really enjoyed all the works, and the chance to have them placed in context with a bit of a story and a chance to compare and contrast. during the week afterwards, i was able to give people who couldn’t make the main tours a consolation tour – with out the booth and vibe of the day, but still a glimpse into the sound works, the wall and a copy of the CD and maps.
i was so flattered at all the people who came and the great feedback i got about the works.
i also feel incredibly honoured that i was able to make the work that i did, and to be able to connect with such a wide variety of residents and locals to the collingwood housing estate. mad props to
the wurundjeri elders and their ancestors who allowed me to make work on the country and who were generous with their time and blessings
mark ryder, who was a total rock;
to sue kent and john bainbridge who ended up totally backing me, even though i was an upstart early on;
to kaukau who helped me and really befriended me
to my guest listeners: eddy carroll, jed from VACRO and travis marke with his year 8 music class
and to lucas, who helped me reason it out.
thanks for subscribing to she sees red by lauren brown. xx