parties are funny things really. they can bring out the best and the worst in people.

organising them is both fun and awful at the same time. no matter how many i’ve thrown, there is still that inevitable fear that no one will turn up. or worse, 3 people will turn up and instead of a party, it becomes a wake commemorating the death of an idea i had that i’m somehow popular, good company or just fun to be around. and i guess, as an artist, i’m going to have to get used to that fear, ‘cos unless i become so uproariously famous in the next 6 months and never have to organise an opening again, i’ve got a few more parties to throw. 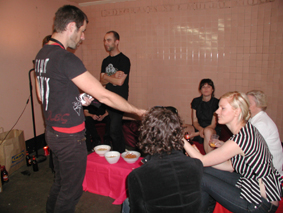 thankfully the closing party for entropy at platform 2 went OK. not as pumping as i would have liked, but still a pretty cool little intimate affair, with a bunch of family, friends and a few platform regulars. the setting was pretty cool and if i had my time again, i would still cart a bunch of furniture into the subway and have a loungeroom party there. i sold a couple of pairs of undies and anita and din from platform were both taken with the little boxes of remnants i had there too. 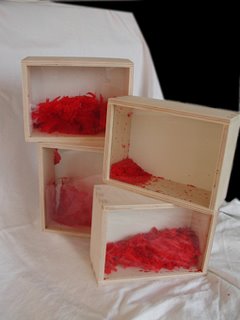 the other thing about parties is being invited. or not being invited. there are some parties you don’t need to be invited to – you just hear about them and rock up, the more the merrier and they’re always fun. except when the house gets trashed and you have to fix a broken tap spouting water 15ft into the air at 3am. for example. then there are other parties where you get the invite: the special parties like weddings, 30th birthdays and golden anniversaries. or to transfer your blog to beta.

for the last month, while the rest of the cool art blogger kids were sprouting about beta blogger, i was left staring at my feet, wondering when i was going to get an invitation! i had flash backs of being chosen last for the lunchtime football team in grade 6 and not being invited at all to a princess party in grade 3 (who wants to be a stupid princess anyway).

thankfully, i’ve finally been asked to cross over to the dark side of the blog! she sees red will soon be in glorious beta technology and joining the ranks of the fully qualified again 🙂