sometimes the artworld collides right in front of me. you know those times when a bunch of seemingly unconnected people are all talking about at the same thing at the same time? well, it’s one of those weeks.

this time, it’s about presenting inspiration. 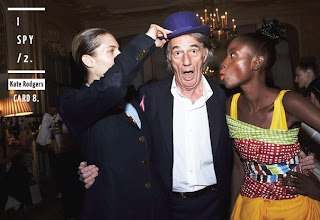 Part of the L’Oreal Melbourne Fashion Festival (which kicked off this week, in case you weren’t aware of all the extra heel around town), this little projection series has been curated by my friend Simon Winkler and his creative partner-in-crime Chimere Cissé. It’s a showreel of the snapshots that inspire a range of fashion/jewellery designers, including TV the label, Dhini, Karla Way, Yeojin Bao and Kate Rogers from Dazed and Confused (pictured). With the launch at £1000 Bend on Saturday, the works are at a bunch of places around Melbourne town: Fed Square’s big screen, Alice Euphemia, Georges and the City Library. more info here.

I saw this on these on The Sartorialist the other day and thought that they were a pretty neato idea. It works really well as a nice anchor to the perfomative aspect of the fashion spectactle: lights, catwalk, bump’n’grind, in your face style – and this little tangible history of the collection.

Opening tonight at CCP, again this is the presentation of artists’ ‘collections’ – the images they have on their studio walls or in their hearts. These were presented in an array of styles that hark back to trad gallery/object formats (which adds a bonus little twist for the relationship between art history/the object and The Photograph). Some of the images are hilarious. Some are so adorable. The one from Hany Armanious is gorgeousness. [i’m purposefully not mentioning the Andrea Fraser video because i’m going back to see it later. i’m almost peeing with excitement]

See? All three within a week!

It seems the structure of artistic/fashion concept has become desireable simultaneously. We don’t just want the finished and polished product and the final narrative anymore. We want the inside scoop, the cheat sheet and the secrets to the magic. Or at least a little clue.

From an artists’ perspective I do love these shows – i get to feel part of the club. But part of me feels une petite tristesse too – like i’ve peeked into the dressing room after the show and the illusion has been tarnished. Am i reading too much into it?

warning: impending rant. it includes sweeping generalisations and comes with the following disclaimers: i am a) not the best dancer in whole wide world; b) not a dj; c) female. last night i went to The Laundry for a friend’s birthday and a bit of a boogie. for those who live in melbourne, you know that it’s not the best club in the universe. but on a cold and rainy night in the middle of spring, it was where the party’s at.

i know i’ve said this before, but i believe dancing and sex to be on the same playing field. and i reckon the way someone dances tells you a lot about, well, them. as an extension (ahem) to that, i reckon you can tell a lot about the way a dj fucks by what he/she plays. and one of the dudes at the laundry, girls, is gonna be a lousy lay.

it was one of the frustrating psudo-fucking experiences ever. almost as bad as the worst sex you’ve ever had – he had no stamina: playing tracks that would build up to be a good pumping danceable beat, letting them carry for about a minute, then switch it. just as we were getting our groove on! it would completely kill the rhythm. and i forgave him a few times, there were a few cool tracks which saw an almost-full dancefloor, but time after time i was frustrated as fuck. i wanted to go over to him and yell “just let me dance, will you!!!”

which confirmed for me how much dancing is like fucking – girls need time to work up to it all, but can go all night. where as guys love to mix it up, keep it snappy, to keep themselves engaged, for want of a much better word*. and this was no more obvious that on the dancefloor last night. the male bar staff and a couple of the guys dancing were totally loving the hit-and-mix. they didn’t actually have to ‘dance’ for that long and got all high-five about that wicked remix of a remix of a remix, with that pop-culture-i’m-so-hip-dialogue-sample maaaan. whereas my (girl) friends and i were all getting so frustrated at him building it up, promising that ‘i’m gonna make it pop’ a thousand times, without actually dropping anything in above 95 BPM. ugh.

a few other things i noticed, which added to the amusing insight about dancing as pseudo-fucking:
white people have no rhythm. wow. it’s really obvious. i mean i knew that. watch any stand-up comedy from eddie murphy and you’ve been told a hundred times, but i really saw it last night. there was an especially ‘white’ couple ‘dancing’ which was hilarious – she was all joints and limbs, with the worst style ever, but trying out the oh-so-sexy-who’s-your-daddy-doggystyle-moves. it was kind of embarassing and i shuddered to think what their sex life was like.

then there was the group of very-pretty ladies who, rather than just dance, they felt that they had to either take the piss out of dancing, by doing very bad dance moves, or by talking about what moves they were doing. i couldn’t work out whether this was de rigeur for the youff these days, or whether they were just nervous. i also wanted to say to them “just shut up and dance, will you!”

i could make some crass segue between rhythm and structure, space and conceptual installation art practice here. but i think i’ll leave it. “shut up and dance, will you!” will just have to do.

ok, so i’ve got a post brewing about the importance of public transport and a blurb about civil liberties, but i just had to post about these two cool things first:

little people in the streets of london 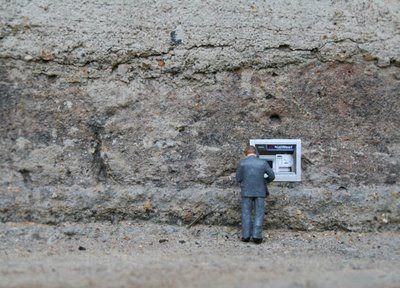 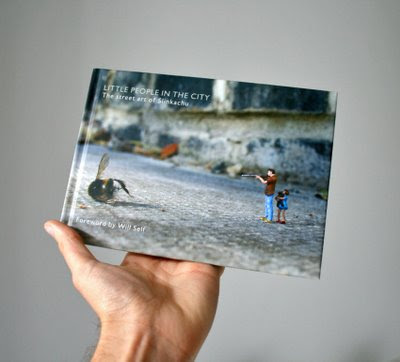 slinkachu is an installation artist/photographer who sets up teensy weensy dioramas on the streets of london. you can buy the documentation from cosh (a super-cool gallery in soho), or you can buy his upcoming book, out on the 5th september. if you’re in london (or near enough), you should head along to cosh on the 31st august for the installation hunt that he’s set up as the launch for the publication. you have to find 4 installations in london and you get a signed copy of the book. how much fun is that gonna be! not as much fun as the innocent fete or the london marathon, but pretty close, right?

people piles in the streets of vienna then over at swiss miss (where i pinched the pics from), i stumbled upon a cool project by art director willi dorner and photographer lisa rastl have a couple of people projects on the streets of vienna: ‘hängende gärten’ and ‘bodies in urban spaces’. how cool do they look!
the works are looking to discuss and perhaps distort the “relationship between body, space and architecture” and definitely play with the role of human movement/stasis on a city and the urban environment. wish i did that.
http://www.ciewdorner.at/

oh, and it’s all over the bloggersphere at the moment, but the eureka tower car park signage treatment is supremo. check these out: out and up/down

a while back, i made a comment about design/branding/creative output needing to be flexible and consistent. my friend mr dodds took the piss out of me (and i’ll never let him forget it, poor love).

but i found a vid over on andy’s now in colour blog which is not only a fucking awesome manifestation of harmony, structure and rhythm, but also illustrates “flexible consistency” to the max.

has me wanting to research sine waves all over again.