day 2 was the first ‘real’ day for me. from a performer/artist point of view. i got amongst it. but i still got to check out a few things happening at the festival. I spent a large chunk of the day performing, or catching up on little tasks. I popped in to check out the China Club Arts Hub – a fluid series of spaces, with open, workshops areas, a great kitchen that serves crepes (including their specialty – the date crepe, with apple). I went to see Matt Rochford’s alarm clock extravaganza – a series of clock radio alarms, mostly set to the same time (give or take the random one or two), which were set to explode at midday on Saturday. I did get to see an amazing performance – my personal highlight of the festival thus far: Ensemble Offspring, Pimmon and a performance of the Stockhausen piece: Kontakte. Pimmon is an electronic artist and academic who produced some beautiful soundscapes while offspring ensemble make improvised syncopated works. their collaboration was a perfect mixture between the two methods – a great reverb/electro distortion and collage.

The work of Karlheinz Stockhausen is a recent discovery for me, but what a discovery! And this performance was a combination of acoustic instruments, performed by Bernadette Balkus and Claire Edwardes and electronic parts by the fantastic sound engineer, Bob Scott.

As well as a great performance, the amazing aspect was the fact that the two principal performers on stage were both women. Stockhausen is the kinda guy that all the boys love and it’s not often that you see the ladies up there. Well, I was pretty excited anyway.

I did have plans to see Suzanne Grae and the Katies – great band from Melbourne that i keep on missing, but the line-up was mental and they finished before i could get there. sad face. well, i’ve been in newcastle, at TINA/Electrofringe since thursday morning and i promise that i would have posted something in depth about it if i could. not that there isn’t enough material – there’s plenty of that. but it’s the time. the time!

here’s a gllimpse of how full it’s been: what’s in my bag. i’ve just got back from an amazing performance of stockhausen’s kontakte andi have about 5 minutes to finish eating, before heading off to see suzanne grae and the katies perform. but i promise, really promise, that i’ll write up a post about the first couple of days when i get home.

and if you’re at TINA this weekend, don’t forget i have a presentation to give on saturday afternoon, 2pm at the round theatrette. pop in and say hi. at least on your way to the other 55 awesome things on 🙂

See what that says: Catch me at This Is Not Art. And more specifically, Electrofringe. Daniel and Somaya, the awesome peeps at Electrofringe kindly offered me a place in their program, so I’m taking the Cone of Silence to TINA.

Over the last 3 days I’ve been patterning, cutting, sewing, riveting, lining and packaging to reconfigure the Cone of Silence from RMIT’s first site, to create the wearable, mobile version. A quiet costume, kinda.

I’m super excited about going – especially after the ace, but stupidly short time I had there 3 years ago. I’m looking forward to catching at least a couple of good shows and learning stuff.

I’ll be wandering the streets of Newcastle, soundproofing the city – bringing some silence back into the place – especially amongst the glitch of a festival focused on making a helluva lot of noise. 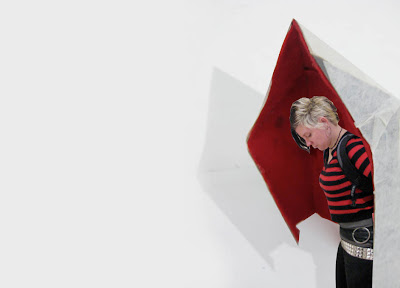 The Cone of Silence is also available to hire for 30 minute sessions from the Festival Hub/Club. So you can have a bit of quiet time in the overwhelming goodness of the festival.

If you’re at TINA, please come and say hey if you see me about. I’ll be there from Thursday – Sunday and will also be giving a more formal artist talk at the Round Theatrette on Saturday afternoon (3rd October), at 2pm. If you’re one of the 3 people there, feel free to ask awkward questions – I’m always up for a challenge. Heh.

And if you’re not at TINA, well, you should be seeing some of the Melbourne Fringe shows – some of which I’ll post about shortly – there are a few little gems about, that’s for sure.

i’m a whole week behind on posting about this, but it’s always better late than never, right?*

last friday, as part of the architecture + philosophy series, design research institute and the urban interior research group from RMIT, jane rendell – writer, architectural designer, art critic and historian from the bartlett (ucl) in london- gave a presentation: to and fro: site writing.

she spoke about the role of writing in terms of art/architecture, the role of critique, the influence of ego and the id on critical architecture and the inevitable interstitial space between public and private.

i left the lecture almost bursting with ideas. in fact, i almost left myself a voicemail message as a reminder of all the cool stuff i had heard. i kind of wish i did because, 7 days later, all i can remember is the feeling and a faint connection to the notes i took.

she does have a new book coming out soon – site-writing, in which the process of critique and writing has been developed into a more formal process-based work, in which the various forms of language about site and experience are interspersed, a collage of sorts, even.

and as interesting as that is, a point of discussion which we had included the importance of purely functional writing and/or critique. where the traditional roles of object and outcome remain separated and the writer takes on the role of designer – responding to a brief: to articulate the nuance and visual code of an artist/architect/performer’s work

there were a couple of key points, which i thought were particularly interesting.

1. immersive critique – whereby the writer responds to the work, not as a detached observer, or dissociated object, but from within the space. it reminded me about andrea fraser’s ‘little frank and his carp’ – the video work she did where she responded to the guggenheim by literally following the directives of the audio guide – rubbing herself on the smooth walls, etc.

2. repression presents itself through repetition. i thought this was a particularly interesting concept. coming from a ‘history never repeats’ aspect, but i guess from an aesthetic position, it’s something i’d be interested in researching some more.

3. the relationship of feminist theory and psychoanalysis to architecture. luce irigray is prime example, but i love being part of a discussion where the concept of design acknowledges gender politics and sexual identity. goodness abound.

i’m hoping that her presentation/paper will be uploaded to the arch+phil site soon, because i need a refresher course, but in the mean time, here is link to her presentation for one day sculpture in nz.

and some pics of my notes. you know, writing as image and back again [click to enlarge]. 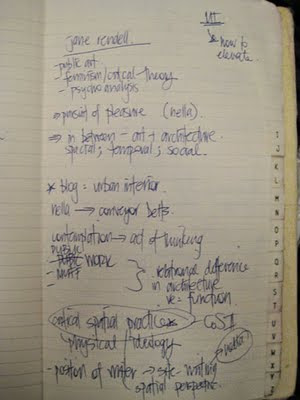 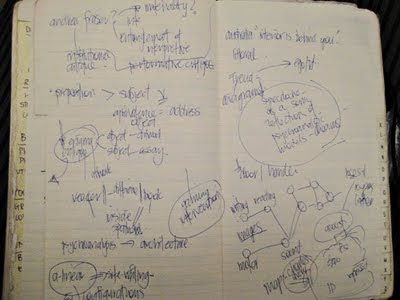 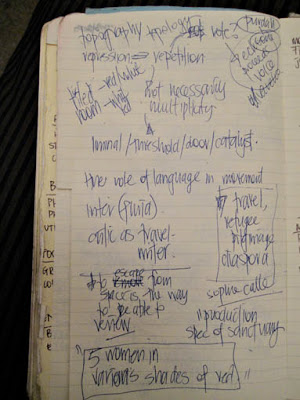 *except having your period. then it’s always better never. as you all know, this year has been a crazy busy year for me. i think the official twitter hashtag for my 2009 is #norestforthewicked.

so, in 2 weeks’ time i have an installation/intervention/something-or-other at First Site gallery in Swanston St, Melbourne. It’s one of the RMIT galleries, underneath Storey Hall.

it’s a space that is part of my research into headphones and acoustic privacy; a site-specific work that recreates the actions we take when we put our headphones on – we create a little niche for ourselves to be unheard. a choice over our sonic environment. inspired, of course, by maxwell smart and the cone of silence from the get smart tv series*, it is a crawl space that has been set into the stairway to heaven at the back of the gallery (for those who know the space).

opening on tuesday 15th september at 5:30pm, the exhibition runs until the 26th, in conjunction with the sculpture exhibition: scale of mark.

*of course there are more serious influences like bachelard, adorno, debord and bull, but there’ll be an essay available at the gallery for all you freaks who are interested in cultural theory/aesthetics – this blog is for the lowest common denominator, don’t you know. following on from the not-listening project i posted about last week, saturday saw the extended remix of the listening to the city work that i’ve been undertaking. it’s a process work on the act of listening and the role of headphones in urban life, where sound is a public environment.

in the first part, i was a participant. this time, i mostly delegated. i had 9 other fabulous listeners with me to record and absorb the soundscape of the city, making freeform notes along the way.

each person listened for 1 hour, most in the same spot. each had over-ear headphones as a prop – metaphorically connected to a social code and literally plugged into parts of the city: stairs, handrails, garden beds, public sculptures, bike rails, bus stops, stone columns.

plus, we had the occasional person wondering what we were plugged into, what was going on. as ben said, he could hear ‘the sound of people’s necks turning to stare and wonder’.

i haven’t had a lot of time to distill the experience yet, but in the brief poring over some of the notebooks, it’s interesting to see the same sound events happening and the different ways in which people noted it, experienced it, recorded it. some sounds were noticed, others were not.

most of us went to my local, brother, for a much-need coffee and sweet treat afterwards. it was there that a fantastic round-table discussion happened about the nature of listening in public, the effect of the headphones – both aesthetically and accoustically, and the experience of public sound emersion. i recorded a chunk of it with my dodgy phone voice recorder and am hoping that it captured enough of the dialogue to be useful.

interestingly, everyone’s experience confirmed and related to the research/theory i’ve been poring over, and extended the nature of the previous projects. although it wasn’t quite as big as i imagined it to be, it was still a success, in terms of what i’m interested in engaging with.