i do, however, love this ad in this month’s mag. 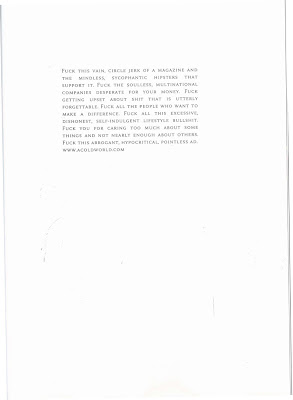 otherwise known as: one of the reasons i’m not a creative director in advertising.

there has been a lot of discussion online recently about the new ad by a well-known english advertising agency, for a large asian global electronics company and i’m going to add my two cents worth. just because, you know, i’m bored.

actually, i decided to write about it today because i met the two artists whose work it’s “heavily borrowed” from whilst they were slaving away installing their own gallery show. i asked them whether permission was granted to use their motif and concept of coloured bunnies escaping in a de-saturated city, in such an obvious way. unsurprisingly, the answer was no.

the thing is, this isn’t the first time that advertising has ‘borrowed’ ideas, motifs, designs and concepts from visual artists for the purpose of brand recognition or communication and i have to say it’s an area that i’m passionate and biased about. in fact, if you’re looking for an impartial viewpoint on it, i suggest you read something like campaign.. creative review… horse and hound.

i’ve always been interested in advertising. my uncle worked on production for tvcs when i was a kid, my mum and i always used to discuss well made ads when i was growing up, i did essays on the dangers of advertising’s power in high school, and now i spend way too much time fucking around on blogs written by people in advertising. but it shits me to tears when creatives like the ones on the recent play-doh bunnies ad, the coloured balls ad (same culprit), the japanese car company cog ad (by another well-respected agency) and others like them, completely rip off ideas executed by well-known contemporary visual artists for the purpose of product placement, without due credit.

creatives? greatest fucking misnomer on the face of the planet.

hell, if the idea is so great and you can’t possibly come up with another one, despite being paid truckloads to be ‘creative’, then get permission and/or credit the artist for fucks sake. just like if you use a song by a musical artist, you have to get permission or at least credit the songwriter and at least pay a hefty chunk of royalty.

i can tell you that 9 times out of 10, the artwork would not have been created to be associated with a commercial, profit-driven branding positioning. and once it has been associated with something as facile as a commodity, FMCG, consumer strategy (or whatever ad wank you wanna go with), then the whole concept of the work is lost to the bottom line and the original execution relegated to ‘coulda been..’ or ‘in preparation for..’

and, having said all that, it does hightlight that old ‘fine line’ again.

within the visual arts, artists borrow from other artists all the time and either incorporate it into the work – like early Richard Hamilton, or recreate work in a different context, or reference (appropriation) – like Yasumasa Morimura. provided that there is enough of a difference from the original work so that it’s not a direct rip-off, doesn’t solely rely on the original outstanding motif, or that it doesn’t adversely affect the artists’ reputation, it is considered acceptable*. both within the industry and in a court of law (well, at least in this country).

so what is that fine line between acceptable appropriation, and downright stealing? is it because, even in an era which avoids talking about the ‘romance’ or ‘soul’ of art, we still like our arts to have a sense of separation from the grit of our daily (commerce-based) life? are we back to square one on the whole ‘difference between art and advertising’ gameboard again? am i just getting way to hepped up about this? do i sound like carrie bradshaw from sex and the city, ending my post with all these unanswered questions? god, i hope so.

*see Arts Law and the Copyright Council of Australia for detailed IP and moral rights legislation in Australia.