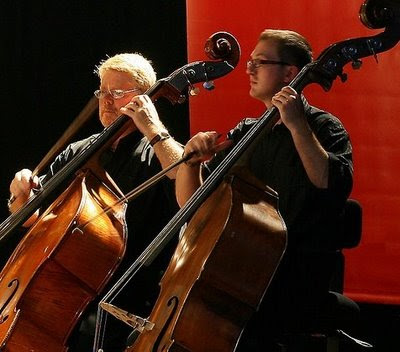 the other night i went to the MSO performance, to the new world. it was a freebie through the test-drive the arts program (ace program, by the way).

and whilst i was being swept away by dvorák, i was thinking about the experience of music and composed sound. that all-encompasing, performative artistic expression which is seen ‘out’ – in public. i don’t know a lot about the history of music, but i can imagine that prior to, say the 17th Century, music was not an altogether “accessible” experience. at least not in a dedicated space. you would probably hear chamber music during the dances and (depending on your station in life) perhaps an orchestra once every 6 months, or a year. maybe not even as much as that. fast track 400 years (not all that long really, in the history of ‘civilisation’) and now, we’re all walking around with own private soundtracks all the time. even if we’re not rockin’ the latest 32G iPod touch, we’ve got car stereos, walkmans, mp3 players, turntables, ghetto blasters, transistor radios, etc. all ‘dedicated spaces’ for hearing an all-encompassing sound. my friend from apple calls it ‘on-demand’.

perhaps it is just me, with a slightly warped focus on sound in public at the moment, but i think this is amazing.
given that i’m now listening to a nick cave and the bad seeds slam their way through ‘i’m on fire’ at about 8, it’s pretty incredible to imagine that my 17th century compatriot might only ever listen to music that loud once a year. no wonder symphonies had such a profound effect on people. and that the cultural significance of a song lasted so long (see faris’ interesting article on latency with regards to that) i’m about to start some research on threshold shifts, but given what we hear now, given that we carry 100 db around in our pockets on a daily basis, plus we have to deal with cars, HVAC systems, trains, buses and much larger populations, it’s pretty astounding how quickly we have adapted to that level of sound (or noise, depending on which side of the fence you sit on).

unsurprising really, that our ‘dedicated spaces’ for listening to (electronically) amplified music have become an architectural/design category in their own rights: up there with the MRC, the sydney opera house and carnegie hall.

expect more in this in the future…