when i was in the national gallery the other day, i popped into the northern renaissance room and had a brief peek at works by flemish kings jan van eyck and rogier van der weyden. several crazy ideas jumped out at me, possibly from spending too much time hanging out on the blogosphere, but i thought they were interesting to think about anyway. 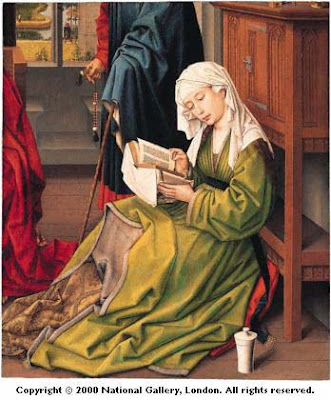 Rogier Van Der WeydenThe Magdalen Reading, before 1438
thanks to the national gallery

rogier and the studio

my first reaction to the work of roger van der weyden was actually a word-association and i thought of ye olde adlads wieden & kennedy, wondering if dan wieden had any flemish background somewhere back there.
the works by ‘the studio of rogier van der weyden’ were amazing, filled with such precision and contrast and loveliness and i was thinking about how the whole ‘studio’ thing works and that it’s a badge of honour to be part of a studio and that you can pick the work of a particular studio a mile off.
is the modern manifestation of a studio nowdays actually the advertising agency or the film set? a bunch of people working towards creating a look or idea of a leading director/art director and you can tell the work of them a mile away.

in the age of individual achievements and ego-based creative industries, sometimes i crave being able to work part of a creative team, without having to have my ‘name’ attached to it. as a balance, you know. 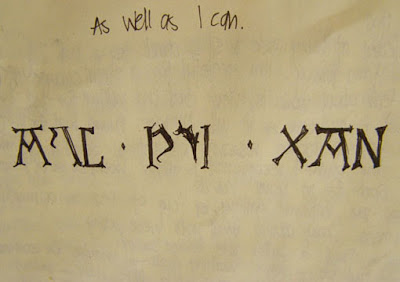 while i couldn’t really absorb much of the Portrait of a Man or Arnolfini Marriage by Jan Van Eyck (thanks to my time in front of Donatello), i did totally get into the text painted onto the frame of the former work. Painted to replicate engraved text, the As Well As I Can (Als Ich Kan) on top became a feature of the work. And when I peaked at the Arnolfini Portrait, I remembered the Jan Was ‘Ere text “Johannes de Eyck fuit hic” elegantly snuck in on the back wall of the lovely drawing room, and i laughed my arse off at the cheekiness of it all.

I’ve been doing a lot of thinking about text/typography lately, for which i squarely blame ben terrett, and it occurred to me that van eyck might just have introduced text/type into painting very early on in the game.

the text in van eyck paintings is text for the sake of text, as an element of image code, as opposed to an explanation of the image, part of actual ‘text’ (ie.bible) or incorporated onto something in the image. this is quite an amazing realisation, text as image, right back in the 15th century. i always liked jan, but now i think i’m in love with the man.

could this be the person responsible for graffiti?

lauren and her pencils

not nearly as revelatory or interesting, and only vaguely related to text or the studio, i thought i’d show you my new groovy pencils. they’re not the best for really drawing with, but i was so impressed by what they’re made from, i bought a couple. in black, and red of course. 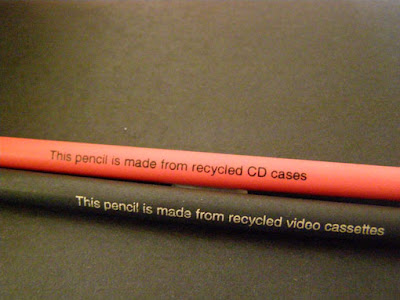