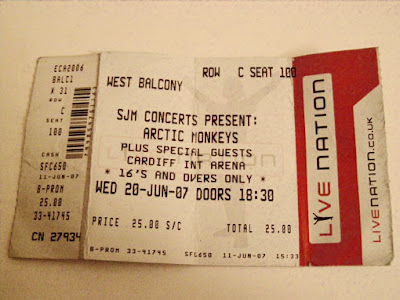 tonight i went to see the arctic monkeys in cardiff, wales, it was a fucking hoot and i have decided that i really needed to write about it here for several reasons. firstly, ‘cos it kicked fucking ace. the bands before them were pretty average, especially the main support – they were trash, but “the ‘monkeys” were so awesome!! they played like a bunch of lads who had somehow become huge but wanted to maintain that ‘we’re just playing in our friend’s backyard’ kind of feel. all the hits were played and totally killed it, the crowd sang along (pretty well most of the time) and the sound was super-hot. in fact i don’t think i’ve been to a gig in such a large venue (CIA) and heard such a good mix. tip-fucking-top. and while i don’t really go for lightshows, this one was pretty damned sexy – intermediate backdrop of 7 huge photostudio backlights which made it totally swanky, and then a proper backdrop of uplit hanging silver threads, all 40s like.. eep!

the other aspect i need to blog about is about the totally fucked behaviour at the show by some of the audience. it’s a sign that i’m getting older, but people who see bands these days have no idea about mosh ettiquette like the way i was brought up to have.

so here is lauren’s gentle guidelines for seeing bands.

1. short people down the front. that’s the way it works, OK. it was getting ridiculous at one stage tonight, so a bunch of us short gals (and one jerk-off midget – more about him later) decided to bounce everyone out. a bunch of tallish lads were trying to push in to stand in front and instead of just letting them through, we told em to fuck off. ha! i don’t quite know if that fits into having ettiquette, but it made life easier for a whole bunch of us, so it counts.

2. hands off, fuck-face! oh my god, the amount of blokes trying to cop a feel tonight was fucking appalling. just because we’re all squished in, does not give anyone licence to go the grope! it happened a couple of times to a bunch of us and slowly but surely, we all started telling the ratfaced dickwads to piss off. in fact, at one stage, i saw our midget friend slide his arms around some young girl he didn’t know like a creepy crawly. she looked so uncomfortable and just took his hands away politely, so i got all motherly and slapped him upside the head. (i know, violence doesn’t solve anything). just ‘cos he’s a little person, doesn’t give him the right to be a fucking pervert without consquences. funnily enough, because he was short, he didn’t see who did it and tried to start a fight with all the big blokes around.. ha!

3. put away those mobile phone cameras.. please. lighters in the 70s were strange enough, it must be really disconcerting for a band to look down and see and bunch of outstretched arms holding up mobile phones, trying desperately to ‘capture the moment’. the funny thing is, how often are you really going to go back and watch that shit video of the night, that’s all grainy and wobbly? it’s really just proof of ‘i was there’ and yes, being cheaper than the merch slightly understandable, but wouldn’t you much prefer to get a well-designed shirt and support the band than a distorted mobile phone photo/video of the night? go on.

4. if you want to snog in the crowd, get a room. there is nothing more offputting than trying to dance and/or see a band while some couple are playing tonsil hockey in the middle of the dancefloor! it happened tonight and i may or may not have been partly responsible for someone bumping into them, interrrupting them mid-snog. maybe i was just jealous. whatever.

5. have a good time and share the experience. there was water being handed out tonight by security, which was a very good thing. it’s nice to share it around too. help each other out – if someone has fallen, help them up. if they’re crowd surfing, go with the flow, they’ll end up at the barrier soon enough anyway and, as much as you can, respect people’s right to enjoy their night. that means having a good time yourself too. i know i rocked the fuck out tonight and it was a total blast.