So much for being the intrepid reporter this holiday season.. what started off as good intentions to write regularly, quickly decended into a severe case of icouldntbefucked within about an hour of hitting melbourne city (as opposed to the space, expanse and leisurely pace of my folks’ place in the country).

i did, however, dedicate about two whole hours to checking out both NGVs – International and Ian Potter Centre. Although, instead of the intensely thoughtful and mind-altering experience i had in Brisbane, i decided to just go the scenic route and scooted through the exhibitions at a fairly decent pace, even managing to not read wall text or go to the paying exhibitions.

NGV International
Sneakers: Classic to Custom and After Image: Social Documentary Photography in the 20th Century.

I’ve always believed that you can tell a lot about a person by their shoes, so both of these shows were an exercise in commentary for me! 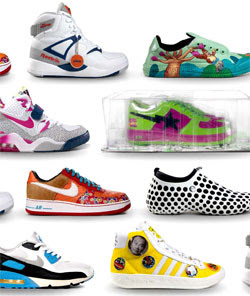 Sneakers was held in the fashion/textiles section of NGV International, like a museum display, with appropriate cataloguing and everything! Hundreds of sneakers were displayed on plinths and ranged from early canvas Chuck Taylors, probably made by well-paid American workers then to plastic-coated shiny silver Nike Airs, continuing to be made by underpaid Asian sweatshop workers. sadly, it wasn’t quite as good as it could have been. sneakerpimps have been doing shows about sneakers for years, and i think their take on the cultural impact of the humble runner is far more engaging and savvy, but for something like this to feature at the NGV, i guess it’s not too bad. if you’re way more into the sneaker way of life than i am, sneaker freaker is probably right up your alley – they recently transformed mag nation into a condensed ghetto for all the hanging sneakers! 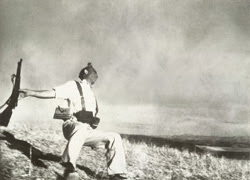 Robert Capa, Death of a Soldier
thanks to the NGV website

After Image was a surprise gem for me. As a photo major, all the godfathers of photographic history were there and i was able to see the originals of some fucking amazing works, some important works and even some works that i based a really crappy appropriation project on! ha!
All the big guns were there: Robert Capa, Weegee, Dorothea Lange and Walker Evans – PhotoHistory101. I didn’t really feel like making love to the works, so didn’t stay long, but have still been recommending it to all and sundry since.

So after the history lesson, i wandered across the road to Ian Potter to check out Light Sensitive. From the 20th Century to the 21st in one easy move!

Featuring a great range of current photographers from the NGV collection, this show was solid and satisfying – props to Isobel Crombie. The who’s who of current photographic practice was there and it actually restored my faith in Australian photography, given the boring crap i’ve been seeing lately. According to the wall text, media releases and the NGV website, “Light Sensitive comprises five themes and ranges from the ‘uncanny’ which includes evocative camera-less images called ‘photograms’ and surrealist-inspired images; ‘new portraiture’ which takes a time-honoured subject into fresh creative areas; a distinctive examination of physically (but not psychically) vacant spaces; documentary work that considers reality in provocative ways; and photographs that explore the complex nature of social groupings in our modern world.” 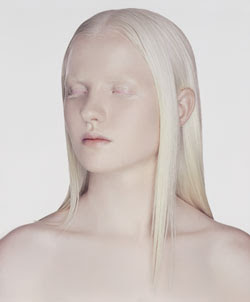 Trad processes like cyanotypes and photograms (“evocative camera-less images”) were represented by Sue Pedley and Anne Ferran as well as a really large panoramic photogram by an artist who i can’t remember but it would have been done on a drum enlarger – old school as!! “Documentary work and [those] that explore the complex nature of social groupings” included work by Brook Andrew, Darren Sylvester and Darren Siewes, although i felt like Darren Sylvester was under-represented and his artists’ statement sounded like it was written by the girls in the photo, rather than an articulate and sophisticated artist. But then again, i hate artists’ statements, so i may be biased.

Scott Redford‘s Urinals were a surprise inclusion, but i guess you could think of them as ‘vacant spaces’… Other notables to get a guernsey included Pat Brassington, Rebecca Ann Hobbs, Cherine Fahd, Selina Ou and although i loved Paul Knight‘s panoramic shot of the titty bar, i would have loved to see his most recent Samstag-winning work in there – the ol’ ducks would have loved it!

I took my mum to see the exhibition a second time and really enjoyed the chance to get to the back section (especially the dramatically lit empty domestic spaces) and soak in the Lauren work by Petrina Hicks, which is the image of the show and the cover of the catalogue. I love that image, which may or may not have anything to do with the fact that it’s from the Lauren series of work. Although the show was based on works from the Smorgon fund, I was surprised that there weren’t more works in the exhibition by Petrina Hicks, as I think she’s really taken contemporary portraiture and photography to a new level – extending it beyond the Thomas Ruff/Thomas Struth style photography and subverting the Bill Henson neo-gothic photography into its own creepy lightness.

And speaking of the catalogue, i didn’t get a chance to buy it (saving for trip to london still – tattslotto failed me again), but it’s a fucking gem. Exactly what you want from a catalogue. Or what I want from a catalogue: Big glossy pics, nice paper, all the images from the show, essay at the front that doesn’t take up half the book and an affordable price: $30!!

What more does a girl need from her catalogue?!