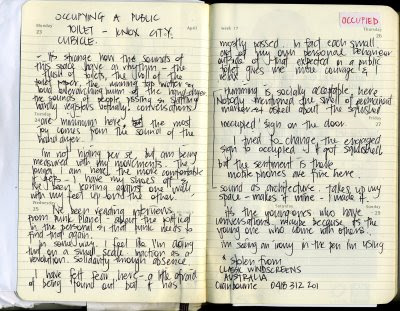 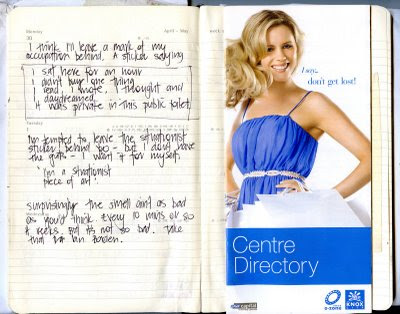 this should probably wait until i’ve presented it to the peeps on site next week, but as i was uploading it to the pages which will eventurally make up my new site, i thought that it might be worthwhile putting up here.

As part of a project on public space, and a continuation of the toilet project, Lauren staged a small performance on a day in September within a public toilet at Knox Shopping Centre – a large private mall in the outer suburbs of Melbourne (and part of the new public spaces of consumption).

The only documentation was a short section of video, writing and stickers left on the site:

An artist sat here for an hour and a half
She did not buy a thing
She did not worry about what to buy
She read, wrote, thought and daydreamed

210
The real values of culture can be maintained only by negating culture. But this negation can no longer be a cultural negation. It may in a sense take place within a culture, but it points beyond it. (Debord)*

*Taken from the chapter: Negation and Consumption within Culture
Society of the Spectacle, Guy Debord
Published by Rebel Press, UK.

The aim of the action was about privacy, public space, private space and acting politically through inaction. a kind of extension of gandhi’s nonviolent resistance – a resistance to the sprawling mass of consumption that places like Knox [see also Chadston e and Southland] are – suburbs as shopping malls, with a hold over public facility and jurisdiction, without the accountability or regard for the politic.

This work also sought to challenge the idea of what a private space is in public. Interestingly, before the action/performance there was talk of the police being called, of centre management reacting badly, of the women who were using the other toilets taking offence at someone sitting in the toilet, not using the toilet, but just being there.

Interestingly, these were just the anxieties of artists who have been told, time after time that the public cannot cope. I had no problems. Not one person asked what i was doing, not even when i had to retrieve a pen that had dropped and rolled into the next cubicle. No one from centre management came and knocked on my door – and my toilet was in the block next to their offices. No policewoman asked me to leave the centre.

I got to have my own space for a while. Just to sit and chill out, read, think, hum a little, dream and write. Public space without the pressure of buying something. It was lovely.