Skip to content
i just want to go on the record saying that chris brown and i are not related. 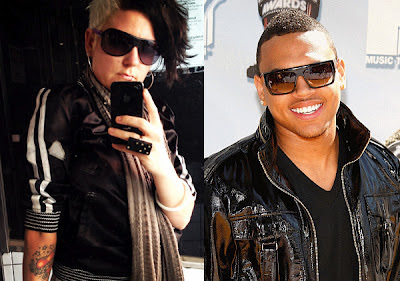 which is just as well: being related to a violent misogynist is hard work. half the women in the world know what i’m talking about.

breezy, who got pwned by busta rhymes in look at me now *(perhaps the grammy really needs to go to busta, huh), is a terrible blight on music, poetry and even crass celebrity. i will never get within a thousand miles of him, but i still feel the clunk of fear in my guts when i hear his name.

and i have never quite understood why he’s still out there, without so much as an apology or a sense that things really have changed. in fact, it seems to be business as usual.

i only really learned that he hadn’t become a pariah when i was doing the residency at collingwood last year and a 9-year old gorgeous girl, sonnie, loved chris brown and i had to include him in the mix tape. i never weighed in on people’s musical choices during that process, but when she said that she liked chris brown.

it’s for girls like sonnie that the thought of chris brown getting a grammy: more sales, air time, more weight – makes me sick to the bottom of my uterus. it’s girls like sonnie that boys like breezy get away with beating on. the only thing i could say to her that i really didn’t like him. that he was a nasty man.

and you know, honestly, i didn’t realise quite how nasty. last night i read the police report on mtv (like everyone else) and it’s quite shocking. the fact that rihanna is still an amazing confident performer after that shit is impressive. 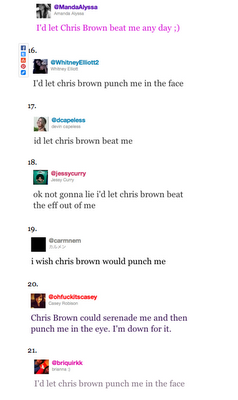 and then i read the sickening buzzfeed link on twitter responses to c-brown. the ‘i’ll let you beat me’ feed. oh i almost vomitted. not to mention the revolting comments after their post.

this post by lamb beats wolf put it into another level of perspective (including the fabulous counter tweets by @JennyJohnsonHi5).

i do believe that people make fucked up mistakes, that change happens and that people deserve the chance to make things differently. i have lots of friends who have become amazing people, thanks to that second chance.

but from what i know of people who have fucked up, they have humbly admitted it, often publicly and they change.

and you know it – you can hear it in their voice. they disappear for a while, they pull back and work out how to be better. they don’t hire a crack PR team and keep telling people to ‘get all the way off my dick’ on twitter.

which i’m pretty sure is why there’s quite the furore over my man CB’s grammy thang. it’s not just because he’s a shit musician, or that we can’t forgive.
it’s not because we don’t understand the complexity of domestic violence.
but because we can see a liar from a thousand paces and when you reward bad behaviour, it says a whole lot about the world you want to live in.

*do yourself a favour, click on the lyrics starting with ‘ayo breezy’ and check out the ‘meaning’ behind them.