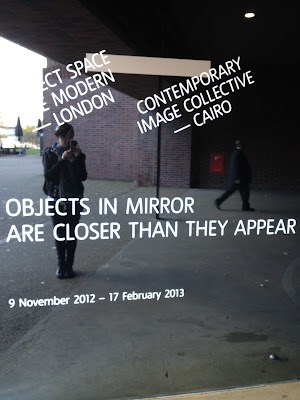 I think the River Entrance Project Space at the Tate Modern is one of the most undervalued spaces in London.  I still think about the delicious Nicholas Hlobo show I saw there 4 years ago and the rest of their shows are consistently great.

Their current show  Objects in Mirror are Closer Than They Appear,  is curated by Contemporary Image Collective Cairo and the gallery is drenched in darkness. The show’s premise is to reduce the privilege of the visual perception and reality –  the catalogue opening with a quote from Jean-Luc Goddard’s Le Gai Savoir, 1969.

“If you want to see the world, close your eyes”

Although mostly video works (which is quite the paradox), they’re all interesting ways of dealing with the theme.

There’s one work which is particularly hilarious to watch other people watching: A Middle Aged Woman by Ján Mančuška.  It’s a text piece – a slowly changing script of a narrative – that is presented on a screen and people sit down on the floor to watch it, like it’s a TV show. The ‘action’ they’re reading on the screen is enthralling and the reactions from the audience are fascinating – a cross between watching moving picture and reading a book. But together, in public. Like a group twitter session or old fashion ticker tape views.

Another ‘text versus image’ work,  Morrissey Foretelling the Death of Diana, is based on the conspiracy theory that the Miserable One predicted Diana’s death through his lyrics. It’s an amusing mash-up of Morissey lyrics, images and pop references connecting music-based poetry with the pastiche of the current Monarchy to create a history that isn’t necessarily real..

Dissonant is a  video installation by Manon de Boer that I came in half way through, so I didn’t get the whole of the work, but I’m going to tell you about the work from my experience.

It began in darkness – you hear puffing and grunting, moving and squeaks of flesh. You get the sense that it’s a woman, exerting herself and because it’s in the dark and I’m a perve, it’s get’s pretty sexual, pretty quickly. I stick with it, wondering what it felt like to listen to someone else having sex and whether, because it’s art, I’m not really prying.

This huffing and puffing sound piece shifts half way through and the video comes (back) into view. It’s not a couple having sex AT ALL, but a dancer rehearsing a contemporary dance work – squeaking and moving, huffing and puffing all over the studio, you perve.

I found that ‘big reveal’ so thrilling! I loved that my first thoughts were sexual, that men left the room all uncomfortable, only to see miss seeing what the true picture was. It also says something about contemporary dance: its sensuality and yet highly visual form.

Reading the catalogue afterwards, I can see that de Boer’s work actually starts with the image of the dancer and her music, with the darkness being half way through. But I don’t think it matters too much – the work is about the darkness, the black gaps that fix our memory of a film and perhaps the intense power of the auditory in a story.

Double is the retelling of a story about parallel universes, by Mančuška. Although in-jokes and meta narrative in art is getting tiresome, what with meme culture knotting us all sideways, this work is enjoyable nonetheless. Probably because, above all else, I love the work of Franz Kafka and this could easily have been made by him.

On a screen, there is an image of a man standing in front of the image of a man on a screen. The second man is sitting, telling a story to someone off screen. It looks like he’s in an institution somewhere, an interrogation room of sorts. The first man is standing, lit as though on stage, telling the same story to an audience off screen, although we only hear his voice narrating. The story itself is one of the first man coming home drunk one night to let himself into his appartment in Praha and faced with a stranger who attacks him. It turns out to not be his appartment, but an exact replica of it in Bratislava  – same section of the city, same looking block, same layout and same key access. A parallel.

Layer upon layer, truth over art over truth, replication and storytelling are all elements to this work. Its simple form allowed for all those themes and ideas to come through.

Yet, honestly, I’m not sure i would have stood and observed the work for as long as I did, if i wasn’t trying to get 3G reception near the door. It’s the first work in the entrance and a little intimidating to stand right in front of the door to view this work. I watched loads of people (friends included) walk right past it. So if you’re reading this before you’ve seen the show, keep that in mind and make sure you stop a while.