last week i popped in to see this year’s ‘new’ show at ACCA, new09 – it was awesome. and it was awesome for it to be awesome, given that the last couple of been a bit, well, un-awesome. almost to the point of meh. (translation: it was good, thankfully as previous exhibitions have been disappointing)

while a fair few of the artists this year are hardly brand-spanking new on the scene, the show itself was a pretty tight snapshot of some hot young thangs: simon yates makes awesome ‘matic’ works – i remember that i loved his robot and drawings from primavera a few years ago – and his interactive robot type things here are fantastic. tissue over a wire armature, on wheels and radio controlled, the boy and the girl appear to interact, but then it’s a bit random. and you’re never quite sure if they’re responding to you, or repelled by you. nice metaphors actually.

they’re a great start to the show and it’s nice to see works activating the (newly refurbished) foyer space at ACCA. in fact, it feels like a place to actually sit and read books/drink coffee. unlike before, when i always just wanted to get the fuck out 🙂 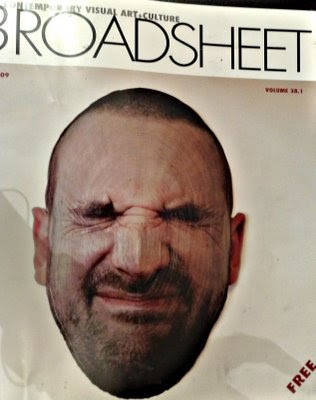 “father, i have sinned. i have used adolescent pop-culture as a frame of reference in viewing art. please forgive my shallowness.”

“say three hail marys and give up television for a week.”

my first impression of justine’s work was, sadly, holly from red dwarf. in fact, the first words that popped into my head were “hello dave”. i know. i’m sorry. it couldn’t be helped.

but, having got that out of the way, these works are beautiful and elicited a sense of curiosity about the human face in 3D that intrigued me. i was able to really check out the detail of this photo-sculpture version of a man, up close and personal. in a way that i would probably never do. even towards my husband – i just walked up and analysed his face. which was strangely sexual and scientific at the same time. and it carried forth the idea about interaction and engagement with works, which the yates’ robots had started.

given the amount of love for these two about at the moment, i’m afraid to say that their work excites me not. and it’s not like i haven’t tried – i’ve been to see them/their work at MAF08, SCAPE08, Gertrude Studio 12 and now New 09 (numbers, numbers, numbers) – but their broken structures and interventions into ‘institutions’ leave me a little bored. zero desire to interact. maybe i’m not trying hard enough.

i’m used to benjamin’s organo-creatures.. brightly coloured visceral-type things and was looking forward to seeing what he had for new09. and, as much as i loved the forms, there was something not-quite-the-same as the white sculptures that inhabited the room. it’s almost as though the alien was there, but had died and gone to some kind of matrix-esque purgatory.

i didn’t get a chance to hear a whole lot of these conversations, interactions between mattehew and peter stringer, but i loved the concept and the way they were displayed – singular screens of each ‘participant’ and then one for the conversation as the sum of its parts. i’m well into the subject of discussion/discourse in art at the moment, so i’m looking forward to going back and sitting down to listen. i’ve been a fan of marco fusinato’s work since i read a conversation between him and sean gladwell in an artspace publication years ago. i’ve always loved his relationship with sound/signal/rhythm/code and am trying to figure out a way to go to the artist talk tomorrow.

unsurprisingly, i loved this work. and it may or may not have overtaken any feeling i had for the other works in the show. the installation is a huge x-like lighting rig with sexy silver scaffolding, a fine mess of leads, couplings, bolts, sandbags, amps and a sensor.

it is rock and roll.

the sensor is delayed and sets off the work, which ends up in a blast beat of light, sound and intensity of experience. it is brilliant. in fact, when it went off in front of me, or actually, behind me as i was facing the corner, i had to yell out ‘thank you london!!!’ it was straight out of stadium rock – a musical experience that is Spectacle101 and the ‘highest’ point of performance that you can get, when it comes to the 4/4 beat.

and even in its ‘off’ state, the work is impressive without being gradiose or arrogant. it states its place firmly and with a quiet dignity – which is something that i’ve always found about fusinato’s work.

the sky-cam construction by ellis was an interesting antidote to the full-on light works by fusinato and probably worth revisiting when i go back. i always find ceiling-based works intriguing, in terms of the viewer’s gaze and obvious change in perspective, and did with this work too – especially the whole ‘looking up at looking down’ kind of perspective. in fact, i remember thinking at the time, of all the hours i spend in the pool, looking up at the sky. and wondering what it must be like to spend hours looking down. sadly, the sculptural work in the room wasn’t something i connected with – perhaps in a different context i would, but thankfully, it didn’t detract from the work as a whole either and i left the gallery feeling buoyed and excited.