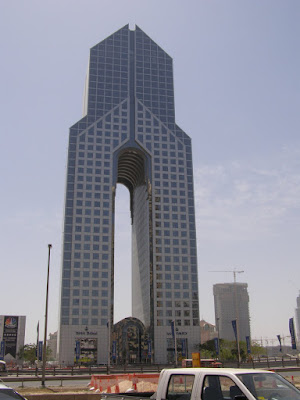 on the weekend, i found a whole bunch of pics from my trip to dubai. i uploaded ’em to flickr and in trying to add some names other than C[insert camera generated number], i realised that i wasn’t able to note the names of the buildings, mostly ‘cos i was zooming past at 80MPH in air conditioned comfort, which makes it hard to identify them. I tried to find them on the interweb, but given that dubai has so much new goddamn architecture going up, the usual keywords like “architecture, arch, new, dubai, marina”, well, i end up with hundreds of thousands of sites. (in fact, if anyone can give me a clue on this one, dusit dubai? much appreciated)

i also found it fascinating that the naming of architecture is quite unlike naming art. sometimes it’s the name of the function (like the consulate of monaco, or the beijing aquatic centre), then there are the proclaimed titles, usually residential towers- like eureka, rialto, etc. and of course named/branded buildings, like CH2, CCTV. then, you get down to people-residential size and it’s essex rd house, cape shank house, all a bit ambiguous/anonymous. but the name of the designer starts to feature far more heavily there – paul morgan architects, andrew maynard architects, etc.

and then, of course, there are the nicknames: the birdsnest, the gherkin, the death star.

interestingly, with public art the names and ‘clients’ are far less weighted in the public mind (and lets face it, artists and commissioners alike aren’t so great at promoting that either), but the nickname is still there – the vault, shit on sticks, the cheese stick/rib cage.

but on nicknames – maybe it’s because i’m so oz that i don’t mind a bit of a nickname, but i think that when something in the public realm gets a nickname, it’s actually the sign of a powerful work – one that people have enough affection towards/animosity against to own it by renaming it. and they only rename it so they can know it. OK, so sometimes the nickname is media-created. But does everything that is created by the press stick? [only to the walls, she says]. I don’t know – i’ve not created a work that has generated a nickname (probably ‘cos the works i create don’t stick around on the streets for long enough), but I’d like to think that if I did, I’d roll with it.