mr and mrs smith has such a nice ring to it, don’t you think? that’s good because i think i’m going to have to marry sam smith.
it’s been decided.
not in any real way – hell, i’m sure he’s a nice guy, but i don’t know him from a bar of soap – but his artistic concept, craftmanship, technique and production is so hot that on an artistic level, i think i’m in love. 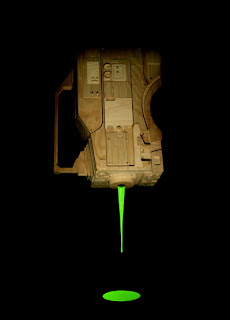 so i went and checked out the sam smith show at grant pirrie yesterday morning, obviously.
plus i revisited the anne landa award at AGNSW to sit down and watch as much as i could of Monika Tichacek’s The Shadowers, which Sam edited. (Not to mention his rockin’ work on the Soda_Jerk stuff I already raved about on this blog a few months ago).

The grantpirrie show was amazing. The video work when you first walk in is too much to handle as an intro, but head into the main nave and the three wooden sculptures are instantly divine. I’m so into finely crafted wood at the moment it’s ridiculous, but Sam’s pieces are amazing. Made from ply (maybe even marine ply?), there was a huge video camera, dripping green-ness, a cathode tube (with an actual tv screen attached) and a miniature tv/film set with a surveillance camera attached. (Plus 2 video works on the walls and a relay screen – although i’m going to come back to them later). Even without the references to the video work in the rest of the show, these sculptures are amazing pieces of art, aesthetically beautiful and poignant in their displacement/realignment of accessible objects.

I know separating the two is not how the show should be reviewed, but i just had to have a bit of a drool over the craft first.

But it’s the combination of the craft of the pieces and the exquisite sharpness of the video works that really make Sam Smith’s show a killer. The seemingly opposite ends of the technological scale make for a balance that supports the theoretical investigations in his work. And those are beautiful as well. The video works really highlight the pervasiveness of video technology and analyse the idea of transportation through the video medium – superimposition, transformation through effects and image manipulation.

The fluoro green and blue of the green/blue-screen make a regular appearance as the signifier of Sam’s ideas and he’s managed to elevate it to an objective or system in its own right now, rather than just a handy technogical development. The green-screen is the epitome of how modern audiences are transformed through images, no longer through the canvas, welded steel or a nice piece of paper – it’s all about being super-imposed.

And after playing with the ‘set’ of Film Still with its real time feed and what felt like a throwback to Fischli and Weiss sausages, having your perception challenged by disappearing doors, flying streets signs and rising rigs of the amazingly crisp and lusciousStreet Still; then drooling over the dribbling fluoro of Video Camera, then and only then, check out the blue-screen video work at the front, Gallery Split. Not only have you had time to absorb the rest of the shows look, feel and concepts which make sense in this work, but then the irony and tongue-in-cheek aspect of the work (apparently created 2 days before the opening) will become apparent.

The little fold-out catalogue of the show was equally impressive and i’m looking forward to reading the essay by Dan Angeloro when i’ve got a bit of time up my sleeve. 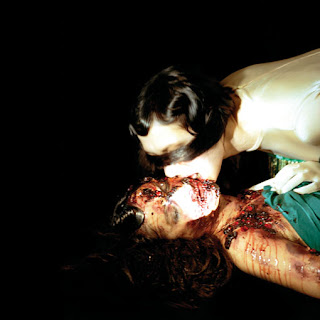 Monika Tichacek, The Shadowers
Thanks to artspace (sydney)

And just to give a quick glance to Sam Smith’s other work that i checked out yesterday, Monika Tichacek‘s The Shadowers as part of the Anne Landa Award. I had seen most of the exhibition before, but because it was the award-winning work, you couldn’t get in to see the work to save you on opening night. And despite it being at Artspace for a month, i hadn’t seen it there either, having been too traumatised by the daily screams filtering up to our office. So finallly i had a chance to check out her amazing work.

Given the level of stylised, Matthew Barney-esque sex and violence i think i did pretty well – i’m very squeamish about that stuff, so being able to watch 25 of the 35 minute work is a record! The production and look of the work were amazing! Make up and costumes were fantastic and there was an all-star cast of helpers – Shaun Gladwell helped film, Sam Smith edited the work, performance artist Aña Wojak acted in it and Monika did a whole bunch of acting, filming, directing, make up, etc. If you haven’t had a chance to see it, i can recommend it. And if you’re a little fragile when it comes to the protrayal of sex and violence, maybe take a friend, or do it in two chunks.