but some good ones this time.

When i started my new job, I made a decision to follow cynical rob‘s lead, kind of, and up my magazine reading/buying.

In the last little while I’ve bought Modern Painters and the new Art World mag, got Poster for free, plus received another issue of my Parkett gift subscription. i thought i might give you the low-down on them ‘cos they’re really intriguing me.

Modern Painters, December 07/January 08
When i was a first year art school swat, creating Thelma, a short-lived college zine, I used to spend a lot of time in the DOME bookshop, overlooking Ken Unsworth’s Shit On Sticks (or whatever the real name of it is), reading lots of magazines and lusting after the really expensive artbooks [and the A2 Helmut Newton book which was $350]. I swear modern painters was a thick, chunky mag back then, kind of like Artforum and Flash. Whatever, nowdays it’s a B4 format, down to a manageable length, but still quite solid on the content.

This issue’s top 5 highlights are:

Seven obscured(d) artists in profile (giving the Design Conspiracy kids a run for their money) including Trevor Paglen and Nicholas Hobo.
Art is the New Religion essay by Matthew Collings
Ed Park‘s article on Media
Diller Scofidio (+Renfro) book review (with interesting insight “+” as “more than a graphic tic”, which made me think about Wieden+Kennedy)
Massimiliano Gioni and his article on the clandestine career of Gino De Dominicis

Art World February/March
This is a new Australian version of the UK art publication and quite frankly, it’s the first time I’ve been quite so excited and almost proud of an art mag in a while. I know that it’s a syndication, but between this and the new un mag, things are starting to look up. 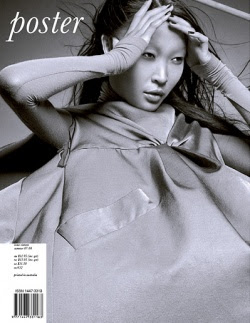 Poster, Summer 07/08
As sponsors of the L’Oréal Melbourne Fashion Festival Cultural Program, I picked one up the other night at the launch. I’ve not seen it before, but loved this issue. Light on text, but quite direct when it was there. Imagery was quite luscious.

top 5 highlights:
Fashion shoot inspired by Joy Division and the Anton Corbijn film Control
Profile of work by Front, hot swedish all-female design studio
Su Blackwell article and folio
Review of Miranda July‘s No one belongs here more than you [remember that really cool promo site?]
Beauty product feature with direction by Colier, with the products shot underneath on glass, looking like their anti-gravity. 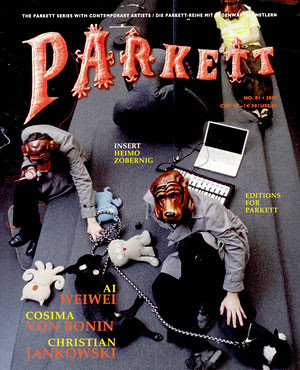 Parkett
This is only a recent arrival and I haven’t had too much time to check it out, but that’s OK, Parkett is wonderful. Full stop. So I’m sure there will be lots more goodness to be discovered.

Top 5 highlights so far:
Ai Weiwei article by Charles Mereweather.
Discussion between Ai Weiwei and Jacqes Herzog (as artists/designers/architects for the Beijing Olympic stadium)
The fold-out cover with three nice glossy images from all three collaborating artists.
Editorial in German – I’m trying to keep my german ticking over and manageable parallel text like this is supreme.
Two covers comparison between Artforum and Frieze, both of whom featured the same Bruce Nauman cover image for their September 2007 issues during the massive Grand Tour season on Venice, Basel, Documenta, Munster.