weirdly, i chose to not write much about london whilst i was there. i preferred to spend time doin’ stuff: reading, going to galleries, sleeping, catching up with friends.

and yet, i also took my time there pretty slowly. i didn’t rush through london like i normally do. i only saw one thing per day, and focused instead on really appreciating what i saw and who i was with. i saw london in a completely different way this time.

highlights of the last two weeks include some random flirty exchanges with the beautiful boys in london’s east end, seeing the usual awesome peeps, dancing, drinking excellent coffee (including my first coffee overdose) and hanging out in an artists’ warehouse for a week.

i spent a lot of time writing, and reading and thinking rather than looking. but, prompted by my friend anthony, i realised i should probably also blog about some of the shows i saw in london. so if you’re in london, you should go and see them. 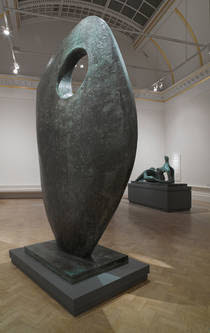 i’m glad i held off going to the RA until this show opened, as it was actually quite an amazing show.
i dragged my friend john around the gallery, stubbornly refusing to follow the dictated room order, preferring to start with the replica cenotaph, followed by beautiful patina body modernist works by barbara hepworth and henry moore (babs and hank, to the rest of us), then through modernism, abstraction by victor passmore, damien hirst and tony cragg and finally back through some wacko time warp including queen victoria bronze being ejaculated over by a jacob epstein marble figure.

ok, so that last part (which was supposed to be the first part of the show for most people) was one of the weirdest starts to an exhibition ever. so if you struck those first 3 rooms from your memory/experience of the show, it’s pretty damned awesome.

i was kinda disappointed that they didn’t quite stick to answering the three posed questions outlined in the premise: what is british? what is modern? what is sculpture? i think modern british sculpture (and most of the works in the show) do attempt to address at least one of those issues, so it was a bit sad when some of them clearly didn’t. and i was also a bit sad that there wasn’t a work by trace or rachael whiteread in there.

but, overall i was impressed dammit. and confused (we spent about 10 comical minutes trying to work out if an aluminium cabinet on the wall was, in fact, a julian opie work, or whether it was just a cabinet – turns out it was an opie – confirmed by a friend of his. as you do.) 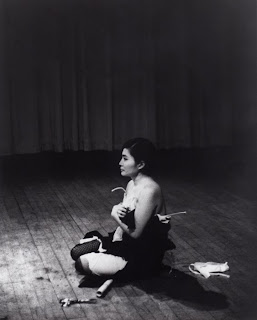 a collection of amazing designers looking at fashion as a means of communicating identity. there were some absolutely stunning works by hussein chalayan, yinka shonibare,  katerina seta, azra akšamija and my personal favourite: yoko ono’s performance cut piece from 1965. it was so brutal and violent without a drop of blood or physical harm done. it was intense.

perhaps i’m too critical, but i did leave feeling that the show, despite its great works, didn’t necessarily dig as deeply into the areas of identity that it suggested. i would have loved to see something investigating more about fashion as THE interface between public/private lives and the sociality or ostracisim inbuilt in particular cuts/fabric/trends, and the link between dress and power.

on the way home from the show i left such a critique behind and promptly fell in love with the new issey miyake black/silver/geometry range. i wanted a particular dress/top so badly, but had to walk away. i swear it’s only a lack of financial committment to buying designerwear that keeps me in my accustomed jeans/t-shirt slovenly attire. ahem. my friend calls anish kapoor a spectacle artist. and i’m sad to say that i’m starting to agree. even though i still have a big soft spot for his big soft works, the reflective pieces in kensington gardens don’t really reflect what i particularly love about kapoor’s work.

they’re big, shiny shapes in the big pond, on a hill, on the grass and near the creek. and people will probably think they’re boring or too easily digestible. which they kind of are, but i still like them. i particularly like how much they mess with your perception of that landscape as a whole, if you let them.
and, thanks to a renewed crush with maths and physics, i also particularly loved the infinity-curve work that makes a white, inverted black hole in the middle of kensington gardens. it’s got a touch of the doctor who/hitchhiker’s guide about it. fun. nothing wrong with a nice bit of fun.


i do love trekking up to sound fjord. it’s a small gallery space that focuses on art and sound and the show on at the time was a strangely compelling compelling collaboration between an artist and a blind piano tuner, ken bonnet. we listened to the whole keyboard being tuned, all recorded binaurally. listening to someone else listening was excellent research for some of my future works. and it was interesting to have some discussions about the nature of listening and knowing.


claire took me to dover st market, on the way to checkin’ out the cindy sherman at sprüth magers, and i fell in love. it was floors and floors of new fashion designer ware, mixed with fantastic visual merchandise, some select home ware, fabulous jewellery and accessories.

ok, i know, it sounds like every other department store you’ve ever been into. but this is different, really. i got to touch/see/feel the newest pret a porter collections by hussein chalayan, comme des garçon, alaïa, ann demeulemeester and lanvin. ok, so i’m not a desiger-for-designer’s sake kinda girl. i have a love and an admiration for the craft and skill and amazingness of some of these designers who keep pushing fashion/code/structure/art/gender boundaries. we had an amazing chat with one of the staff members about how the market works – they’re ostensibly like an art gallery, which completely changes elaborate installations and setups each collection season. amazing to see. 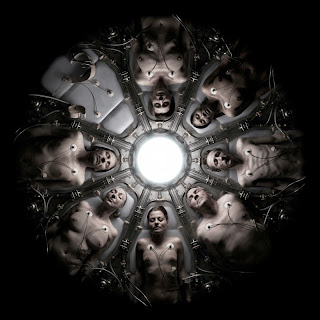 this show was at the new rathbone place gallery and it was astounding. accustomed to a more urban, grimey street feel, this show was a very mature and adult show. the content was mesmerising, with a respectful nod/wink to bill viola and jean-pierre jeunet.

there were two works in particular that i would have totally bought if i had a squillion dollars: the fantastic tank stereoscopic viewing work was stunning. reminiscent of viola’s angels works, it was a 3D video work of a couple kissing under water, with two sets of peep holes: one at water level, and the other underneath.

the other work that should be snapped up is bob, a dystopian loop of a distressed man, in hospital/sleeping gear carrying baggage down a hallway. sounds thrilling doesn’t it. well, you just have to check it out – it was subtle and yet charged with frenzy, emotion and anxiety. amazing.

art superstar claire and i had a ball hanging out at the opening, flirting with security guards and plotting her upcoming comedy shows at edinburgh. most excellent evening.

over those two weeks i had such a great time. and unashamed shoutouts to the people who made me almost fall in love with london a little bit again. they say you shouldn’t have sex with an ex-lover, but maybe it’s different when it’s a city like london:

to the whinging kent, the lanky midlander, the comedian, my coffee buddy (and soon-to-be-newyorker), the audacious caffiend, the art historian and the musicologist, the tailor and the german you’re all amazing.