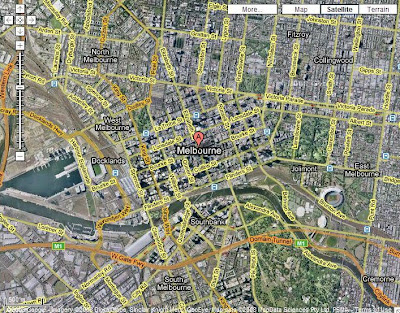 last week i went to the first part of this month’s architecture + philosophy series, featuring ashley schafer from praxis, talking about urban matters: moving beyond determinism vs indeterminism. i only have the concise dictionary of architectural theory, but she did mention landscape urbanism. her theory was that there now seemed to be a retreat from this kind of grand-plan, whole of landscape thinking into a more ‘architectural’ scale – a more specific way of shaping the city. she suggested that this was the role of the architect – to shape a city by building buildings. as opposed to the landscape architect and i’m guessing the more collaborative approach of landscape urbanism influencing the metropolis through concept, infrastructure and open space. of course she cited rem koolhaas as our main main from OMA as the main academic or critic discussing urbanism and the city and that he hasn’t written jack about it since he got those big bites at the dubai cherry.

i found this kind of discussion quite amazing and am interested in how a change in city/urban/space-shaping trends are reflected in other areas, especially technology and the digital ‘generation’. i’d be interested to see if a trend towards specificity and the personal (or perhaps niche) within architecture has a correllation with the way we engage with the digital architecture on a more personal (or perhaps niche) level as a rise in personalised, specific and engaged “domain”. which is a symptom of which? are they even connected? does google earth/google maps give us a big enough picture so that we no longer need architecture to do that for us? is google responsible for the decline of landscape urbanism? (what an ace name for a talk – ha!).

i don’t know, but as someone starting to do more and more working within architectural frameworks and concept, i’m into it.

then, on the flipside, i was catching up on my podcast subscription to the architects over the weekend and heard gretchen wilkins, also an american academic (from michigan), talking about the rise of landscape urbanism and how this was going to save cities like detroit, cleveland and others in the ‘rust belt’. again, she cited rem koolhaas as leading the way in this discussion and that collaboration was important in re-tooling and re-identifying depopulated cities.

so, being well-confused about where the state of city/urban/planning/shaping/architecture is at, i was hoping to go to last night’s tony fry presentation for architecture + philosophy, thinking that maybe he might touch on it as well and add some clarity. but i left my brain in 2007 and completely forgot.*

*i’m sure the architects were there though, so i’m hoping they’ll cover it. heh.

however, don’t be surprised if this topic crops up a bit in the next little while, especially in light of upcoming projects involving public/private space, sound, the city and psychogeography.