The frat house that the nerds from Revenge of the Nerds ended up belonging to was Lambda Lambda Lambda and i have this vague memory of someone saying it in that movie, wearing a pink chearleaders outfit and kind of making it sound like Marcia, Marcia, Marcia! And when i went to the opening of the Anne Landa Award, it was all i could think of!

But that’s not meant to reflect on the exhibition at all.

The opening was also the trustees’ Christmas do and the last hurrah for chair David Gonsky, who is an all-time, super-top, mega-fantastic, supporter of the arts, and moving onto Chancellory duties for a large University in New South Wales (why i bother with subtlety sometimes, i don’t know). David’s speech was amusing and not too long and although others ‘poo-poo’-ed his description of new media as ‘new and fresh’ in relation to it being lauded at Agnes, it was actually a pretty good speech. God knows i wish Edmund had just left us with it, rather than getting a word in. 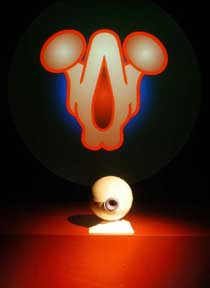 Philip Brophy The Body Malleable 2002-04 – All so sexual!
thanks to www.artgallery.nsw.gov.au

Anyway, the show, the show! In a nutshell, here are my pics: Daniel Crooks, Daniel Von Sturmer (swoon!), Philip Brophy and Monika Tickachek. The others were, well, meh. Tony Schwensen‘s work possibly suffered from being put in a veritable thoroughfare, but i just didn’t dig it. And although James Lynch‘s backyard party-looking work, could possibly better from a different kind of venue, didn’t really float my boat either. Grant Steven‘s text/sunset work just blatantly bored me. But sometimes i’m hard to please and i did actually giggle at the slow unveiling of the text across the screen, like a scene from Jumping Jack Flash when there’s some serious secret online ‘chatting’ going on, although perhaps that wasn’t the intention of the piece.

Basically, the work that i like, especially in this exhibition, but i think more broadly as well, is work with strength of character. And while naive, bitsy, and disparate work seems to be getting a lot of starring roles lately, i’m just not that into it. This possibly reveals my own naivete, ignorance or dagginess, but hey – i am the one that made the Revenge of the Nerds crack earlier!

And if there was any doubt about diversity between art schools, you just have to head to the grad shows this week. Being a NAS alumni, I have always felt a little out of my depth hanging out at COFA and heading to their grad show Annual 06 on Wednesday night, it was really obviously that that’s where the cool kids are. I felt like a nerd walking into the Alpha Beta frat house. But at the same time, it was just like being at an ARI opening – cheap cans of beer and classy plastic cups of wine and loads of denim. General fashion for the crowd was skinny jeans, off the shoulder shirts and ballet slipper shoes for the girls, popped collars, fringes and more skinny jeans for the boys. And i don’t usually notice fashion at these kinds of things, but it was scarily obvious!

Thankfully, some of the work i did manage to see amongst the throng of people seemed pretty sincere, or i might have vomited with boredom. There were a lot of good sculptural/installation gestures – some great kinetic work and a whole bunch of video work. The basement section was so industrial and gritty, it was great! I especially liked the fallen-down staircase underneath all those overpass walkways and the swinging door room in said basement. [Sorry, slack with taking down names…]

And if the COFA opening was an ARI opening, the NAS opening was like going to a commercial gallery opening. Lots of slightly older kids hanging around, a lot of flowy skirts, black natural fibres, the beer was imported and there was even food (although we all acted like seagulls when it arrived!). And the spaces for the show have been renovated and become very professional. Thankfully some of the work coming out of there has become playful and almost edgy, otherwise i think i might have suffocated with boredom. Louise Spent’s photographs of her posing with cut-out bits from blow-up dolls was fantastic and getting to jump on Asha Zappa’s fried egg ceramic works was easily the highlight of my night. [This may or may not have been for self-centered reasons as ‘she’ has also done works with broken eggs/walking on eggshells]

And so, with the SCA show happening this week, that’s it for me for grad shows for another year. Thank god for that! great as they are, it’s all a little, well, grad show.

Unfortunately it also heralds the death of the art scene for the year. Looking throught the Art Almanac the other day, i realised that there is going to be sweet fuck all on over the christmas break in Sydney or in Melbourne! (I’ll go into the serious lack of the visual arts program for the Sydney Festival another day)..Lucky I’m heading up to Brisbane for the APT!!