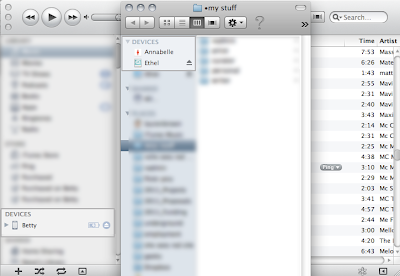 so, you know what else i’ve discovered geeks and artists have in common? naming stuff.

the title in an artwork has become synonymous with the work, even if it’s Untitled, it means something. Postmodernism has seen the naming of a work as its framing, and Dale Frank takes the cake of the coolest artwork titles in all of history.

Whether you think the title should explain, perform or confuse, you have to admit that the moment in which you title an artwork is a ‘thing’. It plays a part.

Talk to any geek that hasn’t named his harddrives, or other electronic devices, and i’ll show you a geek i outta hassle. Part of it harks back to that conceptual fun idea i was chatting about earlier. But i have a feeling that it’s motivated by the same relationship with one’s ‘offspring’.

Naming our stuff, or our projects, or our systems makes them personal. It customises them. And it sets up a dynamic between them and us. They belong to us, and we have power over them.

I give all my devices old-fashioned ladies’ names: Ethel, Mabel, Mildred, Betty. My hard drive’s name is Annabelle, which is not quite so old-fashioned, but is the name i would have liked to name my daughter, if i had ever chosen to have kids. a HD is close enough.

steve, my geek partner-in-crime, names his devices after breakfast cereals.

and way back when I was an apprentice in the printing industry, one of the tradesmen used to name his drives/discs after characters from Hitchhikers Guide to the Galaxy: Trinian, Zaphod, Marvin.
that opened up a whole new world for me.