Skip to content
so, if i’m going to generalise wildly and irresponsibly about art, then i’ll say this: 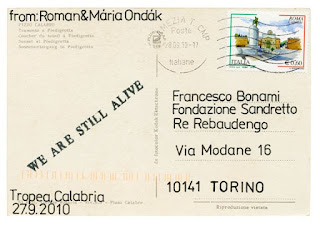 in the last week and a bit, i’ve seen a creepy amount of artworks here about airplanes, airports, travel and flying. i don’t know whether it’s just me, or whether it really is a ‘thing’.

last week i caught the last day of the most-excellent exhibition at the deutsche guggenheim by roman ondàk: do not walk outside this area. the exhibition was primarily about constructing narratives and realities from slices of life, using sculpture, text, found imagery and a fucking big airplane wing.

i vaguely remember seeing his postcard works before; in which he and his wife sent franceso bonami from the fondazione sandretto re rebaudengo postcards from around the world with the same stamp: “we are still alive”, and i like the combination of faux optimism, cutting commentary on the privilege of travel and safety and the process of continuing to send these things from around the world.

and, the rest of the works in the show were way better than these (including the brilliant ‘newspaper clippings’ of eastern european news with all the leading images of people queueing or waiting).

and, the two rooms of the gallery were bridged by the wing of a domestic airplane. complete with the words: DO NOT WALK OUTSIDE THIS AREA.
the audience were invited to walk the wing to get to the other room, although not outside the area.
i was excited. how often do i get to walk on a plane wing? never. and especially as i had literally alighted a plane not an hour prior to attending the show and i had seen those words on the wing outside my window, as we flew into berlin (although they were in french having flow air france, natch). 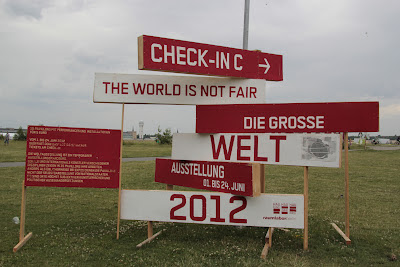 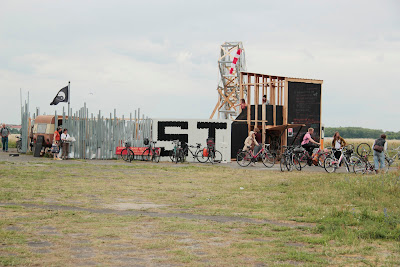 a few days later, i went to tempelhof to get a bit of open air, check out the crazy airport (having recently finished lights out in wonderland) and i stumble upon the raumlabor berlin exhibition the world is not fair. whilst i liked the idea of having an exhibition at tempelhof, for its peculiar space as a public recreation space that still very much looks like an overgrown public transport space, the works that i did see on foot were a little bit shit.

they were all super-open super-relational communal spaces. which, in theory is great. but i feel like a whole lot of art and architecture at the moment is going for the Occupy ‘aesthetic’, for community’s sake and missing a bit about what art actually brings to people. i’m not down with it. as i said to a friend yesterday ‘a shanty is a shanty, regardless of whether its in an art exhibition or not’. but that is another rant.

Then yesterday i go to TANAS/Edition Block (another amazing, consistent gallery in Berlin with a fantastic show) and there’s another work about planes and airport. One in which a group of artists try to make a ‘tattoo’ of a plane at Tempelhof on the grass, so it’ll be seen from Google Earth.  yes, well.

I spent a lot of my childhood in airports and on planes, discussing flight schedules, maintenance plans and the politicking of australian airports, thanks to a father who worked in the airlines. Sometimes i get nostalgic about that whole travel/engineering culture.  But if i’m honest, I’d rather see works about sexy bodies at the moment.