this post contains offensive language. if you can’t deal with it, that’s OK, we can still be friends, just come back in a couple of days.

so the other night at aha!, the creative get together at the commercial tavern, some cunt stole my ipod, and my mate charles’ bag. cctv didn’t pick up squat and the police, well, I suspect they won’t find anything anywhere.

and while this post could easily be a vent about all of that, it’s actually about sentimentality and preciousness. you see, my ipod was covered in this: 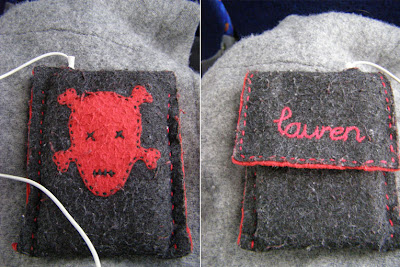 in case you can’t tell, it’s a hand-made felt cover, made by my best friend Sarah, with my name stitched into it! how cute is it! it was a farewell present from her before I came to London and a general ‘I love you’ gift. see how loved it is in that photo? and now, it’s gone. and it hasn’t gone to a good home, either. in fact, said cunt probably just turfed it before she/he hocked the 80GB video pod for about 4 hour’s worth of crack, smack, or fuck.

and, even though public transport is now a bit tougher without my toons, and my travel insurance will eventual replace it, it’s this special cover that I’m devastated about.

my new friend nina was there that night and when I was telling her about the nicked cover, she told me a similarly shit story about her teddy bear. nina has just moved from germany. in fact, her bags are still being shipped and the delivery company rang to tell her two days ago that her backpack had been stolen. which is really fucking annoying, but the only thing in that backpack that nina really cared about, that couldn’t be replaced or covered by insurance, was her teddy bear. she’d had it since she was born and you can’t replace that stuff!

which highlights how important that element of ‘hand-made’ really still is to us. as humans, with the access and capabilities to generate an enormous amount of FMCGs (Fast-Moving-Consumer-Goods), technology, replaceable, recyclable and disposable stuff, it’s the authentic, sentimental, ephemeral and memorable items that we really care about. not just me and nina, but everyone. ask anyone what they’ll grab to save in a housefire and I can assure you (unless you’re Patrick Bateman), it won’t be the Prada bifocals, the Paul Smith suit, Manolo Blahnik strappy stilettos or the Bose 5 Channel Surround Sound Digital Entertainment System. It’s the photo albums, the vinyl records, the teddy bears, the trinket Grandma gave you when you were sick from the chicken pox, you save. the sentimental and irreplaceable.

as an artist, that comforts me a little. knowing that as humans we still care about the time and effort something is put into being. and that the art of making tangible, irreplaceable things, is still a worthwhile pursuit. in fact, i’d go so far as to say that in the years to come, the irreplaceable will be the new currency in the face of a backlash against disposable.

And if you read this and you’ve got my ipod cover (or nina’s teddy bear for that matter), fucking give it back.