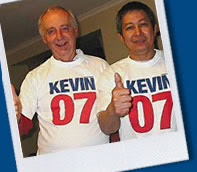 Wow! Change of government! I realise that Kevin07’s Federal Government is still pretty conservative, but boy is it nice to have a change already.

I realised that my entire adult life has been governed by conservative Liberal (note the capital, for those who may confuse it with broadmindedness) government and I’m unashamed to say that I’m feeling relief. I realised today that they will be signing the Kyoto agreement, that health will be back on the agenda (including dental!!) and that a formal apology from the colonialists to Indigenous Australia.

I don’t have to cringe for a little while. I’m not expecting great things, but even those three things will be a nice change from the strangling, small-minded, economic rationalist tyranny we’ve been living under for the past 11 years.

It’s an interesting time to be an Australian…