that’s the second pun i’ve made that makes me groan. i really should stop that, i’ve got a lot of blog post titles to write and i don’t want to a) alienate too many of you and b) run out of material. 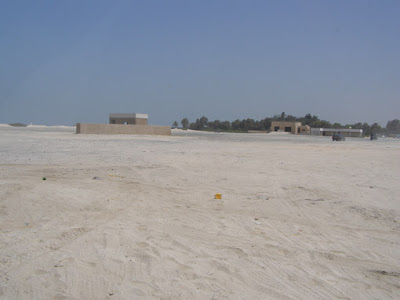 so, as you may have guessed, I’m in dubai. it is an amazing place,a bloody anomaly and I think unless you’ve been here, I can’t even really explain it. I’m grateful that I have a sense of wonderment and that I’m willing to accept Dubai on Dubai’s terms. That I’m not expecting Melbourne in the desert (or something similar).

Firstly, I’m glad I came here knowing someone (well). One of my best friends lives here and as a result of that, I was met at the airport this morning by a wonderful lady in a bright yellow jacket who was part of the marhaba service. Dianne from Marhaba took me on a golf-cart ride through the very large airport, whisked me through passport control without a drama (and thanks to my tattoos, piercings and slightly odd hair colour, that’s a huge deal) and organised for a porter to carry my bags. all of this was organised (and paid for)by my friend and I’m so grateful for it. If you are ever coming here, take note. The ladies in the golden jackets are saviours.

My first day here was kind of about managing jetlag and saying a quick ‘toodle pip’ to the place. I was introduced to the heat, the mad traffic and the joy of 5-star hotel lobby bars(including fantastic waffles were great!)as a place to wait for a taxi after trying for 45 mintues in 38C heat on the street. We also went to the Dubai museum, which needs a serious kick up the backside in terms of really cataloguing their exhibits, and a couple of galleries, saw a fantastic exhibition by an Iranian Parisienne and ate some amazing food. Yes, I may have almost passed out from jetlag, but that didn’t stop me. I’ll talk more about the art later. 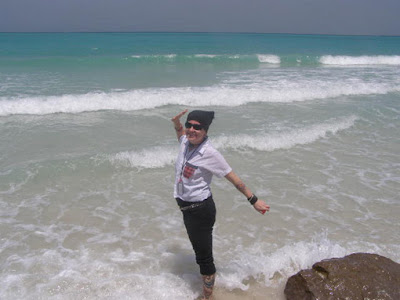 jumeira beach, not the one we paid for.

After another nap, we had some tea (dahl) and then trotted off to the beach park. Coming from Australia and especially Sydney/Wollongong, having to pay to get into the park so you can go to the beach was very strange for me. The beaches and parks are packed at night here, especially in Summer because the heat is fucking unbearable. Mostly Indian,Pakistani and Filipino families hang out in the park (there is a huge Indian/Filipino population which make up most of the labour force), squeezing in some time together before heading back to one of their 2 jobs.

Day 2 in Dubai was definitely tourist day. Otherwise known as art and architecture day. And by the end of it, I was beat. So tired that I didn’t even get the chance to do the one thing that I had wanted to do hear for ages, which was go dancing at the Palm, an Ethiopian club in Dubai. Dammit! 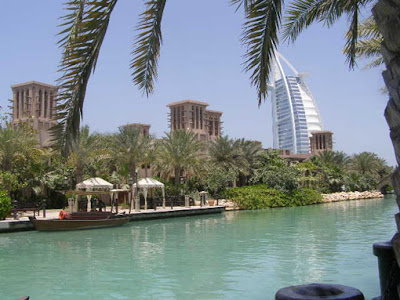 Anyway, I digress. In one day, I got to see the breadth of Emirati architecture here and for me it highlighted the breadth (and confusion) of heritage and experience here. Not that I’ve been around the world to compare, but it feels like the Emiratis have attached status to architecture more than anywhere else in the world. Dubai, especially, is an architect’s wet dream. There are new buildings going up every goddamn second. And I don’t mean the 20 storey monstrosities that we complain about in our whitebread suburbs in Australia (and maybe in other cities too), but I mean some serious buildings going up. Huge 70, 80, 100 storey things with the most amazing and contemporary designs you’ve ever seen. Sydney and Melbourne have some pretty spiffy buildings, designed by some amazing architects, but the architects working in Dubai shit all over them. 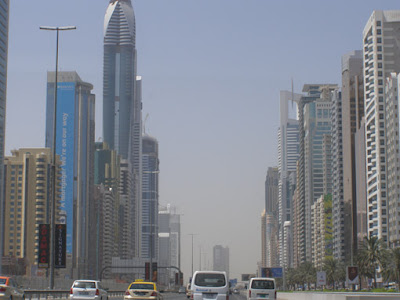 There are bowed buttresses, split buildings, wind-tower inspired works, circular buildings, spires, wings, you name it, the new buildings here have got them. I’m sure they’ve been designed with some kind of function in mind, but it sure feels like the kids have been given a massive budget and told to design the coolest looking building they can. And it seems they’ve also been told not to worry about context, landscape, practicality or ventilation, no need. There is no context because Dubai has only been around as a modern city for about 2 seconds; The landscape is the equivalent of a white canvas (read: desert and a bunch of other new buildings) and ventilation? Allah invented air conditioning, so don’t worry about it. 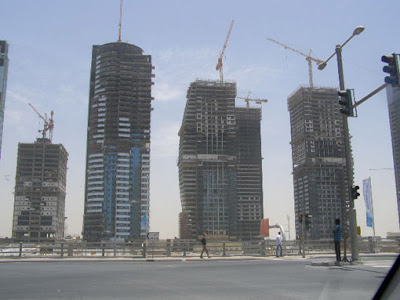 I really know fuck-all about architecture, but I’m super-interested in it as a manifestation of a society’s identity and its relationship with itself and others. And in this context, Dubai is fucking amazing! and I could spend a lot of time burrowing into the complexities of the place. I’ve bought an architecture magazine to try and get some enlightenment and hope to find a book on the Emirates and its relationship to architecture. If anyone out knows some more or can point me in the right direction, tell me more!

The diversity of environments that I had the pleasure of visiting yesterday included Jumeira – which is s.wank.y, the infamous Burj Al Arab – which I only found out was in Dubai on the plane, Madinat Souk, which is in an amazing resort and based on old mud-brick wind-tower style buildings, the new Dubai Marina -biggest building site in the world, man, Sharjah University City – based on a mash-up of the Champs Élyseès and the entranceway to the Taj Mahal, Sharjah desert, Sharjah Art Museum – an amazing classic building which also houses the Sheik’s [gauche] art collection and the Blue Souk. Then my head exploded and I had to go home and go to bed. 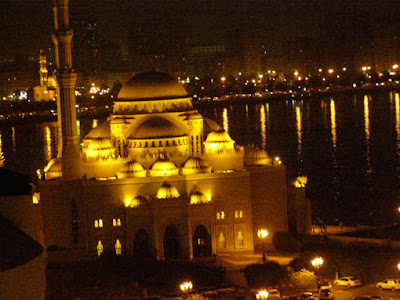 sharjah mosque on the corniche

I think it’s going to take me a good couple of months to really process the intensity of experience I had yesterday, so I’m glad I took photos. I usually hate being one of those touristy types that spends half the time looking through the lens, but with the barrage of amazing sites, I really needed to record it in some way so that I can go back to it.
I’ll do a separate post about the art in the Emirates to include XVA/XVB and Sharjah Biennale 07.

I’m heading to London tomorrow morning so today we’re just going to chill out, check out the Emirates Mall and Ski Dubai. And if you think that sounds lame, hanging out in the mall is what is done here. It’s nothing like Mall Boy or Mall Rats. Malls here are iunder cover, air-conditioned and the main place where people can interact – families and young ones alike. It’s like Cooper Pedy above ground, kinda. And yes, full of western stores and companies. (BTW, Age, i’m going to post about Nike in the UAE, just for you!)

One or two post about the UAE is not enough to convey anything worthwhile about the place, but i’m not going to spend all my time writing, so you’ll just have to come here and see it for yourself.