I’ve been wanting to post about this for a while, but have been a little, well, manic. Then I get an email about it and I thought it was a perfect opportunity to chat about it here.

Human Rights. And the fantastic book by Geoffrey Robertson – Statute of Liberty.

I’ve been reading the book over the last few weeks – as much as i can before i collapse into sleep – and it has been amazingly educational and still absorbing as a novel-of-sorts. I keep getting sucked into it, reading way past my bedtime.

The reason i first got the book was because i felt that, as a citizen in a democratic country, it was my responsibility to engage politically with what goes on here. It was only $20 at Readings, which impressed me no end – i think books about politics should all be super cheap, so that we can actually afford to read them and find out how it all works!

Anyways, when i finally got around to reading it, i was suprised how fluidly it was written – it’s like i’m sitting on a couch in an easy lecture by Mr Robertson and he’s just telling me, in pretty straight-up lingo, all about the history of human rights law, the history of parliamentary democracy in England (of which i had no idea), Australia’s role in developing the Universal Declaration for Human Rights (an Australian lawyer was part of the leading committee in developing it and the main reason we didn’t continue the momentum with implementing our own act was because we had everybody’s favourite conservative PM in power – Mr Eyebrows the First, Robert Menzies).

The last part of the book (is this call for a spoiler alert? i don’t think so) is the draft bill that Robertson has proposed that we enact. Geoffrey (as his wife Ms Lette probably calls him) is a renowned human rights lawyer and all-round good-guy. He is probably biased towards a statutory bill of rights because he’s used them time and time and time again to defend a range of people whose rights are being transgressed. But in the book he also addresses the failings of various nations’ bills and addresses the arguments from the main critics: the usual suspects – the church and the media. [ed. oh the irony!].

So, when i got the email from Get Up today about the campaign to enact Australia’s Human Rights Act, it was bloody awesome to know a little bit more about it than before and to really feel quite confident in writing to my local MP, who just happens to be Essendon Football Club’s #1 Ticket Holder: The Hon Lindsay Tanner, MP. 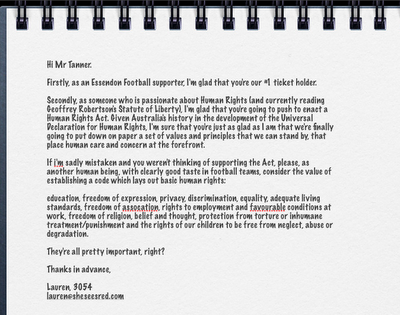