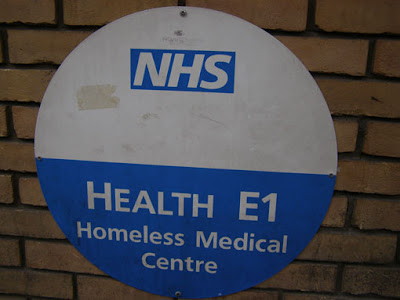 so, over at rob campbell’s blog, there has been some excellent discussion about how to really, truly, properly, deeply make a difference to the lives of the homeless. in smart and creative ways that actually help them. it’s important to read and contribute so go there.

but first i want to tell you about how i think rock’n’roll can help them too.

so, the other night i’m at a punk gig for a great band. they’re over from the states and they care about shit. they do stuff and say stuff about making a difference to the world and as a result, both gigs were completely sold out, packed to the rafters with people singing along, furiously enjoying themselves to the music and the meaning.

while i was getting myself squished about, i noticed in the back stage area (which is a balcony above the dancefloor) that there was an older bloke who looked like he’d been around the block several times. not rank, but scruffy and shabby enough to probably be living on the streets. he was looking on in wonderment, having a quiet little good time, watching the band, watching the crowd, quietly tapping his feet while keeping his hands in his pockets. and with a smile on his face that was almost ear-to-ear. in fact, even with my rubbish eyesight, i could see the gleam in his eyes as he soaked in the atmosphere and relaxed a little. like when you gatecrash someone’s really cool party, thinking that you’ve gotten away with it but they actually know and like having you around. i could see that he felt a part of a social experience that he didn’t have to ‘earn’ and didn’t have to know the code. he could just enjoy it. let go of the weight of the world for a few hours and join the human race again for a bit, no strings attached.

what i imagine happened is that someone from the band (or crew), in their break between soundcheck and their live set, has gone looking for food and seen this guy either begging, or sleeping on the streets. they’ve gone up to him and said ‘hey mate, do you wanna come to a gig tonight, i’ll put you on the door and you can watch the bands, hang out with us back stage. even share our rider if you like’. small gesture on the part of the band. big difference in the life of our homeless friend and one which i continue to imagine has stayed with him over the next couple of days. hopefully restoring his faith in himself as ‘one of us’. and maybe giving him the strength to start making small steps to overcome it. perhaps go to a shelter, seek help, get throught the night, talk to the police, whatever.

i know that this might not be what happened at all. that guy could have been someone’s dad who is chaperoning for the night and i’ve just publicly said that he looks like he needs a wash.

but say i’m right. say that’s what did happen.

imagine if all bands did this. or even half of them. or 10%. or even only punk bands. it wouldn’t actually take much effort really and there are loads of big bands that swing through cities each day, with a couple of spots on a door list and a rider that’s worth sharing (or not). i know it wouldn’t actually get people off the streets for long, but that little act of kindness and inclusion, maybe even getting our mate to help load in some gear if he wanted to feel a bit useful for a while, has the possibility of making an enormous difference if it’s done, night after night, city after city, band after band, homeless person after homeless person. a ripple effect.

music has saved my life on countless occasions. i’d love to think that it could also make such a profound change on someone else’s in such a simple way.