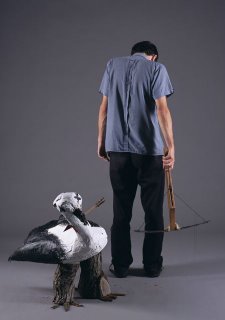 not only as the winner of the Helen Lempriere Travelling Art Scholarship, but to his obvious penchant for red heads. flanked by his good friend Chris Hanrahan and his dealer James fromGrant Pirrie(who could be separated at birth), there was a definite presence of red flowing locks about him after the award was announced.

the man understands the power of red. already a winner, in my book.

I don’t really know todd, but I like his work, a lot. the alone alone show at grant pirrie was amazine and I actually would have liked to buy one of his smaller works. I’m not a fan of NICK DRAKE, but I remember I wanted an E. and for those that are having a quiet giggle, I don’t take ecstasy any more, but even I said to myself while typing it ‘hey, who wouldn’t!’

anyway, back to the Helen Lempriere and the esteemed Todd Mcmillan.

I picked it. in fact I picked it months ago when Zanny told me who the finalists were, I knew it would be Todd that won. and today when the office thought about running a sweep to see who the winner would be, again I said it would be Todd. I had to say it quietly ‘cos I didn’t want Jaki to feel like I wasn’t hoping that she win, but when you’ve got a gut feeling, you’ve got a gut feeling. Next year I’m going to start taking bets.

I’m usually extremely cynical about these kinds of things – the whole show was full, and I mean chock-full of the it-kids of the Sydney art scene right now – artists who are at the peak of their game and producing some really cool shit, but they’re also the names you’re hearing a lot of, so I could easily have whinged and bitched about the winner. and I know that todd is also part of the ‘in’ crowd, but I’m not going to begrudge him this success. he seems like a good guy, plays a good game of netball and isn’t afraid to give his dad a hug, or stand in boxer shorts. artistically he’s also sincere. and I like seeing work that is sincere. ernest even. but not so serious that there isn’t a wry smile in there somewhere.

I’m pleased he won the prize. as they kept banging on in the speeches, the prize has been going a really long time and is one of the largest prizes for emerging artists and it feels nice for once to know that it’s gone to someone who deserves it.

and to someone who chooses his friends by the colour of their hair.