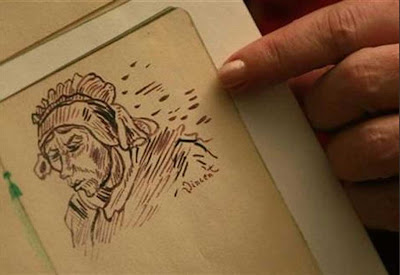 According to artdaily.org [from whom I’ve pinched both story and image] :

“Who would not be moved by such a discovery? This is van Gogh’s soul,” Peppa stated. “He intended this sketchbook as a gift and there is no other like it in the world.”

Imagine stumbling upon that!!

I always love looking through ‘old stuff’. I buy most of my clothes, plates, cups and the occasional typewriter/single slide projector from op shops, and I’ve always been able to find some pretty cool things. But I’ve never discovered anything quite as cool as that.

And you know what I’d really love? If she scanned in all the pages (even if it’s not authentic!) and made it into a daily blog.

Fictional blogs are finally starting to gain some momentum. Beeker has posted about a play character’s blog, and then there’s the fabulous Samuel Pepys’ Diary blog by the fabulous Phil Gyford (and perfect through a blog reader). Imagine this sketchbook, day after day. It could be a great bit of online content, firmly routed in both tactile object and history.