boy the first draft opening on Wednesday night was pumping! There were people everywhere on Chalmers St. Possibly because the gallery was like the 5th Level of Hell, but also because the show went off. There were 8 artists participating in the 3 shows (that’s if you include Spat + Loogie as 2 artists, which i will) and all their friends, family and the regular first draft opening crew. [Which i think i might have inadvertantly become one of, given i’ve been to at least 1 per month and reviewed several on this blog alone.]

Spat + Loogie, who some of you may remember from such art installations as the New!shop, were in the front room with some quite amusing lenticular collage works from Google Images, futuresearch. There were also some interactive goggle things kicking around (Goggle Images maybe?), but i felt a little shy at the time so didn’t put them on. I liked the works a lot, but to be honest, i’m not raving about them. Some of the messages they had were great, but with so many works hung almost salon-style and then framed in faux gilt, with ornate title plaques, it was overkill on the post-modern, self referential, pop-culture quirk.

That’s the second time i’ve been a bit ambivalent about their work, dammit. I really want to love it ‘cos they’re hard working artists who are looking at some interesting ideas!…bugger. 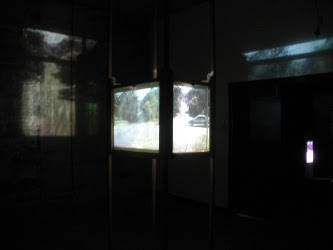 The second room was filled with Migrating Within an eclectic mix of women who are ex-Meadowbank students, focusing on domestic posessions and ownership. Their works were quite different to anything i’d previously seen at first draft, but some were quite interesting. I really liked the perspex houses by Angela Femia, but felt they got lost in the darkness/projection thing. I was, however, quite impressed with the fishtank-cum-window-frame projection object in the second second room by Elke Wohlfahrt. That second second wasn’t actually a typo (although considering my slackness on these things, you could be forgiven for assuming so).

The artist actually built a second wall in the main room of the gallery and created a second second room. It was an amazing wall and suited the space so well! plus, it created a beautiful intimate space for the projection, Muted Suburb, which looked great from about 3 vantage points, and then you had to negotiate piercing light and cross reflections in others. It was actually quite a nice distortion of home-video screenings in suburbia and it reminded me of a book i stumbled upon a while back called Louis: A Novel on Suburbia, or something like that anyway (with Howard Arkley’s paintings on the cover).

My all-time favourite work from the show was in the last room as part of the Serious Play exhibition. Bonita Bub‘s Building Raincoats for Furniture series was fantastic. Clear plastic sewn to create covers for a range of furniture, including a table, chair, armchair and even an indoor plant! At first, i thought Bonita had created neat plastic carry bags for the objects, which was exciting enough. The idea of raincoats was even more engaging. The idea of protection and suffocation about our possessions was great. It reminded me of people my grandparents’ age who cover their couches in sticky plastic to preserve the couch (for what, i’m not exactly sure). I loved the covered (artificial) plant the best, but would have loved to see a real plant in there for the exhibition. just ‘cos i’m a nasty ratbag sometimes. i saw it as commentary on the scaredy cats out there who are so busy protecting themselves from whatever impending doom they choose, that they end up suffocating in the tedium of life. and it reminded me that i need to get out into the big wide world.

or maybe that was just the suffocating heat in the gallery.