so last thursday night was art-opening mania in sydney. i had a choice of craigie horsfield and stephen birch at MCA; david griggs, carla cescon and hiroharu mori at artspace; ben quilty at grantpirrie or elizabeth reidy and
Alex Gereg at MOP. and somehow i managed to squeeze in 3 out of 4 of them and still get the 8:38 train from central! 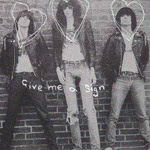 carla cescon,night crawlers & shape-shifters: 100 days and nights in search of the ramones
thanks to artspace sydney website

i’m glad i have the opportunity to pop into artspace again easily, ‘cos i only managed to really scoot around the gallery before getting a lift to redfern. the david griggs pieces are quite imposing and i’ve not seen his work so.. solid before. the paintings are mounted on huge free-standing frames, like billboards for the maniacally repressed. they’re really quite amazing works, and although i can get really over the whole mish-mash po-mo fiasco, these works seem quite profound. i didn’t get a chance to check out the Mori video piece, will do later this week and the Cescon Ramones stuff, well, i really didn’t like it. Although i appreciate the intention of showing fan obsession and possibly teenage angst, it’s too close to the bone for me. The Ramones saved me from full-blow teen angst and I believe they’re one of the greatest bands ever. However, I don’t know if wall scrawl and love-hearts over their posters really constitutes the kind of aesthetic enquiry i like from a contemporary exhibition. 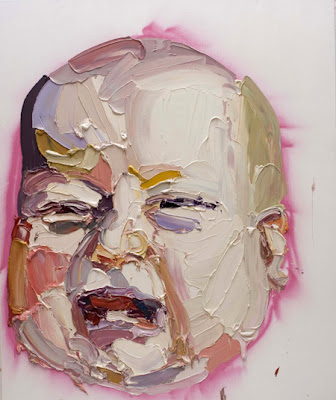 after scoring a lift to redfern, i decided to go to grantpirrie first ‘cos MOP was on my way back home and i thought there would be less people there. as i predicted, the ben quilty show was pa-acked! it was a reasonably warm night, so most people were out on the footpath, sipping vino. inside it wasn’t as squished as i thought, but it was still pretty tight.
it was an opportunity to check out the goop up close and personally, and maybe get a glimpse of a painting from a wide view, if you were lucky. if you want to see what the show really looks like, go and see it during the week – you can actually stand back and see the works from afar. i’ve never really liked quilty’s combination of spray paint and oils, but over the week, thinking about it, the way he’s used it for shadow in the portraits, it’s grown on me.

my highlight for the night was actually watching a little girl check out one of the paintings. she would have been about six and was wriggling about in a half-dance, like little kids do and the way she looked at the work was enlightening (especially seeing as i’d earlier watch Sir Ken Robinson on education at TED): she would go right in close to the painting, look at it sideways, then the other way, step back, have a think and do it all again. i was so busting to ask her what she thought, but she skipped off to hang out with her parents before i had the chance. 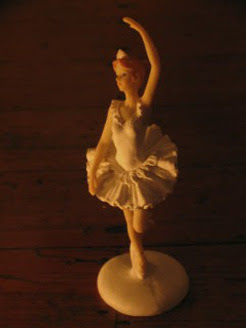 elizabeth reidy,box of broken dreams
thanks to mop website

after having a quick chat with a few of the ladies present (hi jesse, hi katrina, hi iz!), i popped in really quickly to see my friend dave who lives around the corner, only to walk back up the street with him on his way to the bottle shop. so i went back to MOP to see liz’s work in the project room: Box of Broken Dreams. I really enjoyed it. The connection with Nirvana Unplugged might have been slightly lost on me, seeing as I thought that album was tripe and would gladly have sacrificed dreams for it to never see the light of day.
Alas, I digress. The image of Liz as a ballerina was fantastic and i could have watched it for hours. She easily conveyed a sense of loss and childhood expectations without the fru-fru (except the tutu).

Alex’s paintings, Galactic Adventures in the main room didn’t really interest me. Perhaps this is because I don’t have a huge interest in garishly coloured graphic novels, or references to 3D movies or bad screen printing. Perhaps it’s because I’m a closed-minded opinionated bitch.

I don’t mean to sound quite so harsh, but i promised myself that when i started this blog that i was going to be honest. not mean and nasty, just honest and if that hurts people’s feelings, well, it hurts peoples feelings. None of my opinions, by the way, are a reflection of how I feel about my own work or whether my own work is, in fact, up to scratch either. At the end of the day, opinions are just opinions, i guess.

Anyway, as an aside to all that, on saturday i went up to artspace again (although still managed to not see Hiroharu’s work) to attend the screening of Multiple City, a documentary about the project in Panama City by Gerado Mosquera, curator from the New Museum in Havana. It was such an amazing film and perfectly timed, considering my impending research on guerilla works. After the screening and questions, i really wanted to ask Senor Mosquera more questions. so i did what i’ve never done before, i asked for his email address! i felt like i was asking someone for their digits in a club, but it was fine! I told him about my research and he said he’d be happy to speak with me more about it! yay! here comes some interesting progress.. eep!

so much for jaded, cynical cow then, hey.