early designs is a global ‘revelation’ kind of project online, whereby a selection of designers, artists and illustrators show a comparison of their ‘college’ work to their current work. it’s set up by designer/blogger andy whitlock.

andy describes it on his blog now in colour:

“Early Designs is an open project where (hopefully) hundreds of designers, artists and illustrators from across the world will – on the same day – upload pieces and sketches from their college years.

On that day, we’ll get a glimpse into the past of ‘creative types’ everywhere and hear the stories, learnings, late nights and bad hair that made them what they are today.”

i don’t actually know if this will be all that interesting to anyone else, but i kind of like the idea. in fact, one of my lusted-after books is vik muniz’ no.1: first works by 362 artists. as a practitioner, i find it consoling to see artists’ early works. as an appreciator, i find it somewhere in the realm of horoscope, or nominative determinism. or perhaps looking back at baby photos: the evidence of some kind of fate.

anyway, here it is. 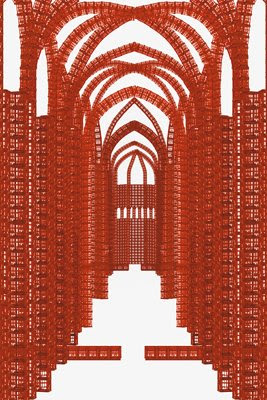 This work is one of a series of 3, all featuring French Gothic Cathedrals – the others being Amiens and Chartres.
I had quite a bit of success with this work – what started out as a one-off, quickly sold out as an edition of 6, with the most exciting purchase by one Brian Kennedy, director of the National Gallery of Australia at the time (for his private collection).

and then it’s all down hill from there.. heh. 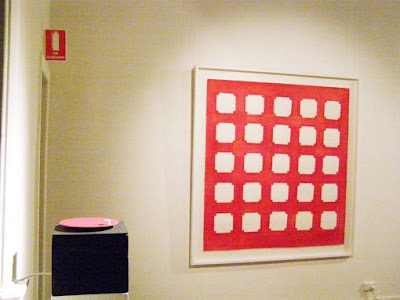 There’s some even more current work in the last post, plus i’m in the middle of a project, but the work I chose to compare it with is work I made for a group show last year at Kudos Gallery, curated by Sarah Mosca, called He Said, She Said, about dialogue. I did works that reflected the dialogues between artists: White, Red, being an extrapolation of Rachel Whiteread‘s 25 Spaces, and Hello, Daniel as a conversation with a work from Daniel von Sturmer’s Field Equation.

The difference between the works and how they have been purchased is quite interesting to me, really. I know that I had far more of a focus on selling the recent work (mostly because I was on my way to London and the thought of having to deal with storing that huge work was nauseating), but was far more willing to cultivate a relationship with my audience than when I was younger. White, Red was purchased by an anonymous collector ([hank you, if you happen to read this blog] , which was both exciting and maddening. Maddening because I’m too polite for my own good and wanted to contact them to thank them. Plus, I like to know who my audience is, who likes my work, and perhaps why. Anyway.There’s something seductive about the relationship to the anonymous audience, as I guess there is to the anonymous artist too (see under The Banksy Effect).

Anyway, there you have it. College work and recent-ish works. Check out now in colour for other early designers.

UPDATE: Other Early Designers so far:
Alistair from We Made This
Susanna Edwards

UPDATE 3: for uni, i have to do a quick presentation of 3 slides about my practice, so thanks andy for inviting me to do this, it means i’ve got two-thirds of that presentation done! ha!