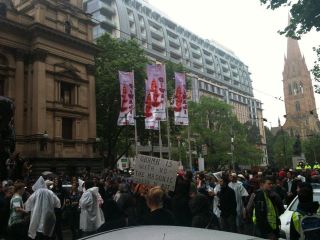 The objections to the Occupy uprisings have been fairly predictable: ‘no single cause’ and/or ‘go back to your jobs’ and the charming ‘the police said move on and you didn’t, why is force surprising’/
Actually, the second one is a typical response to those who hide behind their jobs and expect others to be accountable for their freedoms. It’s not their fault – standing up for your rights can be scary sometimes.
The first one is a funny response really. The reason that there are a myriad of demands by the Occupy uprisings, especially those I have briefly been part of in Melbourne, is that there are wide-reaching effects of focusing solely on listening to corporate lobbies, and focusing on the singular demands of the 1%.
When that happens, healthcare goes; poverty rises; education is to the privileged, citizens civil liberties are lessened (i’ll go in to that in a minute), fossil fuels are mined and housing gets tight. all of those are worth protesting as a singular cause, sure. but all of them together are the symptoms of corporatism.
Mic check: This is what corporatism looks like!
And to the third one, I’ve taken to asking people ‘do you hit your kids if they don’t do what you want?’ It’s kind of the same response, really.
Until today, i hadn’t been down to City Square to Occupy Melbourne. Clearly, i was resting on my privileged laurels: focusing on work and family first. But when I read the tweets of friends who were in the square and about to be evicted, I decided to finally act.

As Jello Biafra says in this interview, it’s better to do something rather than nothing.

I joined the demonstration and occupied the public spaces of Melbourne. My home town, the place were I vote, where I contribute, where I participate in life as a citizen. It was great to remind myself that my rights are not just on a piece of paper, or something that Someone Else will take care of. I have to contribute to that.
So I did.
I also learned an important lesson about the State liberal government’s focus on public spaces, in the form of their new Public Order Intelligence Group. Sounds sinister already, doesn’t it.
Well, it is kind of sinister. Although technically they were working with the local constabulary – whose demeanour was firm and calm, yet still mostly polite – this squad of overall-wearing, nameless cops were another force altogether.
Yelling at me aggressively, I learned empirically that their hands are rough and hard. And that they believe grabbing someone me by throat and throwing me backwards was the best way to deal with a peaceful protestor. At the time, I was moving, but being pushed in a dense crowd down Swanston St and got wedged against a Police car parked on the road.
It was grossly unnecessary. And, like the old woman I am, I calmly told that man so.
I also learned that they are willing to drag a woman by her hoodie onto the ground and not assist her in getting up again, even when that woman was not resisting, fighting, yelling or contesting – but walking slowly in a packed crowd down the streets of Swanston St.
Yes, kids, that woman was me.
Thankfully, years in moshpits gave me the strength to deal with a pack of unruly men pushing and shoving and yelling and screaming. I was OK. Pantera fans are more intense in a crowd than these new thugs in uniform, but at least they’re more polite.
It’s weird to watch a group of people, moving slowly and purposefully, loudly, but in good spirits and with a sense of community be set upon by the human equivalent of barking dogs. I can’t imagine what the perspective of the individual police officer in this situation is.
As well as contributing to a global uprising, sadly this situation has shown to Melbournians the petticoat of the Victorian Police (just like in the Kennett era): an aggressive bully, willing to strike out at the faintest whiff of conflict; attempting to cover up a sad insecurity complex.
Melbourne, we love you!
Don’t let them push and shove you!
thanks for subscribing to she sees red by lauren brown. xx