Skip to content
if i followed everyone else’s suggestion, i would have stayed at home on the weekend.
but i didn’t. 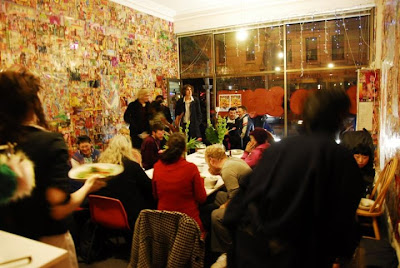 on saturday night, akiko and i went to a rad global beats show at disco beans – featuring a stack of japanese and ex-brisbane DJs.

it’s in the wacky front room of the japanese cafe/art space/bar/thang on high st. it was my first dance party at disco beans and i almost left early ‘cos the first couple of acts weren’t poppin’ it for me.

luckily, i was too busy flirting with fellow partygoers to get around to leaving.
the headlining act, suckafish p jones was the biz. ness. i danced like a maniac for his hour-long set, which included a stack of latin, african, hip-hop and tropicalia beats all mixed up with some other wacky shit. it was gggreat and we didn’t get home until 3am. and boy did i need that.

it total restored my faith in small underground gigs and the power they still have to burst into joy.

that faith was reinforced at sunday’s experimental/improv music gig in studley park. featuring bum creek, snawklor and sun araw, the bands oozed out over the bell bird picnic area. their set ups on picnic tables, powered by car batteries and portable cell packs, it was a mesmorising and magical gig.

as dusk closed in to the sounds of sun araw, the bats woke up and headed out for a sunday night of partying. it reminded me to watch lost boys again.

i have missed out on a stack of big gigs this week (das racist, odd future, kanye) – my head in my own world, but this weekend, i was grateful for the brilliant local gigs that still keep me buzzing and filled.

image credits:
disco beans i like you world
bats lindi we