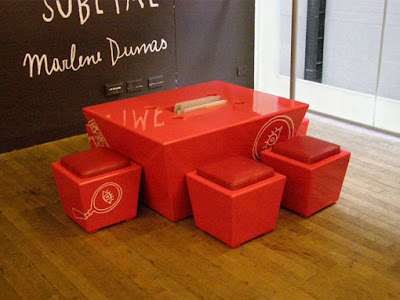 i often compare being an artist to being a cook and artistic practice like a kitchen – there are loads of similarities between the craft of making things that it seems to work well. and you have to be able to multi-task, know when to put some things on high heat, when to just let pieces simmer, have the patience to wait until it’s ready, but the ability to go-go-go when the timing is right.

and maybe it’s because i’m currently doing kitchen work (english pubs have the best qualified staff!) but i thought i would just post about what’s cooking in my kitchen (artistically speaking)

it’s a hive of activity, but not a lot of output. i’ve several dishes on the go and am madly preparing others that i’m hoping will take off.

i spent last night concentrating hard on a little plan of an idea i’ve had, for a work i’d like to see happen in An Undisclosed Location. Like making hors d’oevres pastry bases from scratch, it was very particular and time-consuming, but hopefully will be a good base for some ‘lovely stuff’. Whether it tastes good to others, I’m not sure, but as soon as it gets the OK, it’s a matter of piping out the filling and voilà!

As well as doing that prep-work, I’m I’m also doing some brainstorming (gasp! the bad word at the moment in parts of the blogosphere) for a position i’d like to get. which involves playing around with words and using a bit of software to make things look nice. like working on a recipe, i’m writing, rubbing out, writing, scribbling out and thinking about how best to present it all.

and then there’s another idea that has been slightly formed and is just simmering on the backburner for the moment. it’s going to be a collaborative work, so today the other artist and i went for a bit of a trip to the space, to check it out and see the fantastic show that was on there (check the gallery per day stuff later in the week for an elaboration). it was like doing a tasting – making sure we’re on track, that it has all the right ingredients in the right order and ready to reassess at any moment.

there a few little side orders i’m working on too- one being very simple, like a plate of chips and needs to be presented regularly, and another a bit like soup – ready to go, just needs heating, and they’re the dishes that compliment the more involved ones, making a balanced diet of works and exhibitions.

unlike kitchen life, though, i’m not stressed about all this activity, quite excited about the prospect of it all taking off and the ‘kitchen’ being abuzz again. i’m not quite sure what the equivalent of wash-up is in my arts practice (maybe documentation?), but i’ll cross that bridge when i get to it. for now, it’s all about preparation.