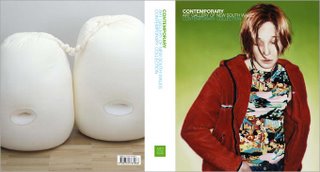 well after all the heated discussion this week about philistines and bad corporate art collections, I went to the opening of the new round of works from the contemporary collection at agnes wales a little confused.

usually I either take the moral high ground and look at the work from a position of disdain, or, more often than not, with a sense of wonder and naivete, hoping to suck in all the knowledge and excitement about new work.

well, tonight I think I was so preoccupied with the upcoming liminal personae show at Gallery 4A, the meeting I’d had about it earlier in the evening, and the fact that I’d gotten away with telling the truth that sounded like a lie to the woman at the door, that I forgot to put on an opinon before I walked in. probably a good thing.

and as an aside, the truth that sounded like a lie was this: “this afternoon I emailed my very late RSVP to the art gallery and got an email back saying that the door list had already ‘gone downstairs’ and I would have to bring my invitation with me. well, in my haste to get to Chinatown in time, I forgot to take my invitation, but I had actually received one.”
now if I was a door bitch, I wouldn’t let me in, so I’m grateful that the woman either didn’t care, or believed me. which was a relief, ‘cos I was actually telling the truth. I thought about telling an actual lie that sounded like the truth, just to make it easier, but I’m a shithouse liar.

anyway, back to the collection. I was quietly impressed with the works that are on show at the moment. there were a few safe favourites and I thought that the emphasis on bill henson’s early work was a little overdone (a bit like someone boasting that they knew the band before they went platinum), and I thought putting Jenny Watson’s Wings of Desire next to Tracey Emin’s work was a bit mean. The feeling and context of the works are similar, but Emin’s execution and schutzpah far outweighed the aussie girl and she ended up looking like the poor country cousin. As an aside Tracey isn’t listed in the chunky ‘handbook’ but I know I saw her work – I’m a huge fan of the diva. 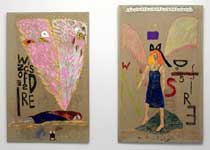 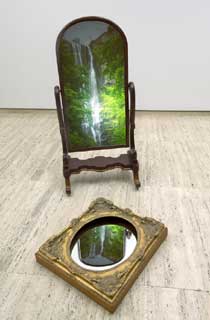 Other work that really grabbed my attention was the Mat Collishaw Waterfall, which was a digital projection on sandblasted glass, set into a turning mirror frame complimented by a gilted mirror with running water flushing through it, on the floor.

Seeing some of the big names of Australian contemporary art was quite affirming after seeing the Balnaves project a few weeks ago and for the moment, I don’t feel the need to whinge about state galleries’ inattention to contemporary art. Other stars of the night for me: Janet Lawrence, Mikala Dwyer, Mike Parr, Ernesto Neto, Christine Borland, Callum Morton (swoon!), Ricky Swallow (yes, daggy, but hey) and the return of the Tatsuo Miyajima Region no 126701-1270000 (boy that title reminds me of The Price is Right!). I remember the first time I ever went to AGNSW, this work was on display and it still resonates for me as a commentary on technology, time, surveillance, terrorism, and armageddon.

Reading the catalogue (my friend’s copy) on the way home (which is a pretty good buy at $45) my cynicism for public collections has waned slightly. This is helpful really, ‘cos if i have to box myself into a “Commercial Gallery” or “Museum Collection” kind of artist, I’d have to say Museum, so I have to find some hope somewhere. The breadth of Agnes’ Collection is actually quite impressive and the foresight of some of the works purchased is fantastic. And although I know it’s a pain in the ass, I’d like to see more of the collection more often.

But I guess, until then, I need to get that catalogue.