i’m reading about some interesting aspects of music and politics lately – namely music and torture.

thanks to a link from the urban adverturer in rotterdam , i found out about about a great project investigating enforced listening – specifically the music of torture and resistance in auschwitz, i’ve also been checking out songs from sesame street used at guantanamo bay and abu graib, trying to find out if headphones are permissable in prisons and thinking about the music of resistance.

defiance through song is not new – the whole of modern pop music is basically a descendant from songs sung by slave chain gangs in america. and i suspect that it’s true power comes through its collective and unifying effects, as much as the musicality and aesthetics.

but can music defy torture, or give a resounding sense of freedom, on ones own? if i was forced to sit in solitary confinement, or was being arrested, or tortured for my political beliefs, what song would i sing to raise my spirits and/or to show that i could not be beaten? would that even work?

can sound-based resistance be such a lonely, singular experience?

and what would your song of resistance be? 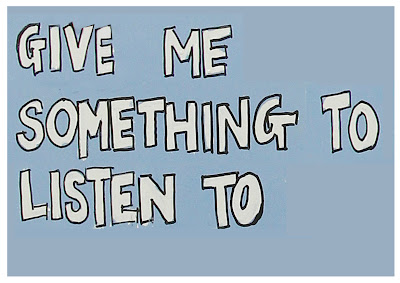 I’ll be doing a 6-hour listening marathon at the Berlin Olympic Stadium and posting the mammoth list of sounds heard somewhere secret on the streets of Berlin.

And, a special for those of you who haven’t bought a Give Me Something To Listen To Drawing yet they’re half price from the Etsy store, just for World Listening Day! 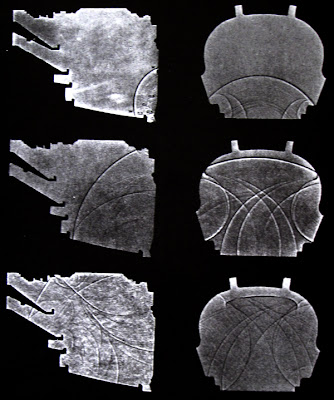 Over the last few days, I’ve been to a fantastic symposium called The Art of Listening – something I stumbled upon, but thankfully could capitalise on my time here and go.

(any day now peeps are gonna call me or invite when there’s something like this happening… guys? please?)

I’m not going to review it all, because, well, i want to keep some of the thoughts for myself for a while. But i might, down the track, talk about the fact that the organisers (across 4 institutions) kept speaking about it as a new area of research. And that, although not a lot of visual artists were represented*, there was a sense that this area that i’ve been focusing my life on is an interest point for those across a stack of disciplines and that they’re all conducive to one another: philosophy, architecture, history, musicology, engineering, media studies and sociology.

I’m going to mention just two things from the symposium, though:

I am now going to investigate the link between Edison Co‘s demonstration recitals of the Phonograph from the early 20th Century and the Steve Jobs/Apple model of business/promotion. I swear, from today’s presentation of Edison Co’s archives by Alexandra Hui, the similarities are uncanny.

And, I have a new brain crush on Jonathan Sterne, the Sound Studies Reader and his focus on a General History of Compression (which could also easily include Cory Arcangel‘s Essay on On Compression – especially the JPEG).

image credit: reverb tests by wallace sabine for the new theatre, pinched from the soundscrapers blog

*except in a great paper on Christian Marclay by Lydia Goehr. 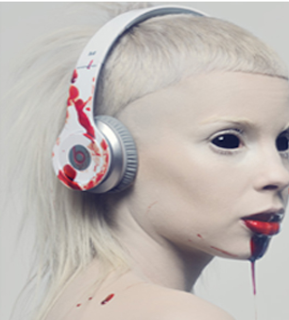 This was an interesting link I came across on Monday night, thanks to digital twink Elliot Bledsoe.

Yes. Beats (by Dre) is now moving and shaking. OK, so really it’s HTC purchasing music infrastructure, but still, the power is coming from a headphones company.

Headphones have previously been subordinate to the tech and the music, especially if they’re part of a company that has investments/arms in all three, like Sony. Headphones have always been ‘peripheral’, or ‘accessory’, not market-leading, or game-changing.

Say what you will about the actual quality of the cans, what Beats by Dre have done for the image of headphones (not to mention their 25% market share, sheesh!), fashion and the flip between music and listening – I’m a massive fan.

“Mog’s service will continue under the same name and operate as a separate company, according to Monday’s announcement. “Both Mog and Beats share a common goal of creating a more premium sound experience and emotional connection with music in the digital era,” David Hyman, Mog’s founder and chief executive, wrote in a note to subscribers.”


Looking forward to seeing how this pans out.

over the years i have done a little bit of this – intervening in others’ works to do my own listening version of it.

it’s quite interesting to me to ‘enliven’ others’ work through this subtle performance. perhaps people don’t get it, but as part of my practice, it’s a way that i can interact with the ideas in others works that reflect my own. and as an audience member, i am also participating in a way that i choose.

the two previous works i’ve done in this way have been to ‘negate’ the listening experience in their work – to listen to something else instead (in the case of a Jean Luc Guionnet work at West Space) and to sleep in to an alarm playing music over the gallery (in the case of the Perfect Day to Chase Tornadoes work at Kunstraum Quartier).

i recently did the same as part of Amalia Pica’s work at chisenhale gallery. although it was less and intervention, more of a response to an opening for volunteers to listen. And, rather than a negation, this was specifically an activation of a work – a listening trumpet in the middle of the gallery.

Sitting for 3.5 hours, it gave me a chance to think about my own similar work in a concentrated way. Some thoughts i had at the time:

listening is deemed to be activated when there is a response to the sound.
as i sat and listened, a young boy and his dad came up and  because my role was to be a human listening object, i couldn’t respond in any way to the spoken/given sounds. the boy whispered hello, and his dad asked whether i though spain or france would win the football on the weekend. i heard them loud and clear, but because i didn’t ‘respond’ in an expected way, they believed the work was ‘broken’. interestingly, they didn’t try to ‘fix it’, or try a hundred times (like you do when headphones are broken, or the computer won’t turn on, or the DVD stops playing) but it was interesting to note that ‘working’ meant ‘responding’. that someone is ‘listening’ when they actually respond to what you’ve said.

of course, part of that is true. in communication and from a psychoanalytical point of view, one proves the action by another responsive action. but from an experiential point of view, it’s not necessarily the case. I was listening. intently.

I also thought about what this means for us all wearing headphones. the idea that we can be ‘not listening’ still works, becuase we don’t respond (or we have a delayed response) when someone talks to us. nice. 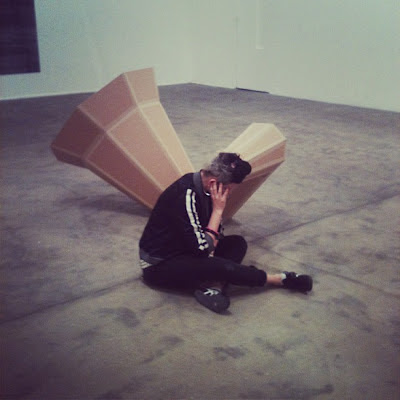 the performance of listening really is a subtractive device.
i’ve spoken about this before – when i was doing my listening and being works. i wondered whether it was just that particular installation (covered in mirrors), or just my perception, but when i performed this work for amalia, a similar thing happened: people would be chatting as they come into the gallery and then, as they see me, they immediately shut the hell up. it happened twice and it was amazing – i wish i had been able to record it. voice levels became low and subdued and they crept around the work. seeing that one is listening, it seems one becomes self-conscious. and perhaps with that, one stops ‘expressing’ oneself.

this has to become a new area of research for me – it’s too good!

What is the pose of a listener?
I’ve been interested in the ‘poses’ of listeners for a while, but participating in this work had me questioning to best convey, through form, that I’m really listening? Is there a best ‘pose’ for listening? Should I move slightly from a ‘passive’ to an ‘active’ pose with the move of my head? Should I look up, or down? Should I act as if I’m concentrating, or is the lack of eye contact enough? I previously made some silhouette works of people ‘listening’ and some feedback I got was that they ‘didn’t really look like they were listening’. Which I thought was hilarious and definitely impetus for a body of work. The presence of the cone/trumpet negated some of the ambiguity, but it was an interesting experiment to see whether I could convey that action of listening, should the trumpet not be there. If that makes sense. It’s all about ‘codes’.

I’ve previously had to ask myself ‘What is the uniform of a listener?’ – which came up again in this work when I got ‘busted’ getting up from the cone to go to the toilet. I wondered if the audience wondered if I was meant to be there, or just another audience member who had decided to sit on the floor and listen. One day I’d like to work with a fashion designer to come up with such a ‘uniform’, but it may have to wait.


The accoustics of Chisenhale gallery itself are amazing. Incredibly resonant, all conversations become garbled very quickly and people speaking becomes a bubble of sounds that pop and diappear very quickly. At some points in the afternoon, there was a beautiful soundtrack which i could have magnetically recorded – combining the hard rhythm of someone walking in heels, with the activity of a spoken conversation, plus the faint echo of traffic from outside and then this beautiful ‘space’ in between all the sounds, from the acoutic shape of the gallery.

It was such a gift to be able to experience and think about all of these things for myself and for another’s work. Having done something like this, now for the third time, i may have to make it a regular part of my practice.

the exhibition is on until the 15th july at chisenhale in london (a gallery i always make a point of visiting when i’m in town) – you should check it out and there’s a panel discussion this thursday too! just read these excellent posts about about street-level music market. like a much more vibrant (and financially beneficial) version of give me something to listen to.

i think i need to go to mauritiana.

thanks to the goodness of goodness: chris kirkley, cory doctorow and boing boing
thanks for subscribing to she sees red by lauren brown. xx