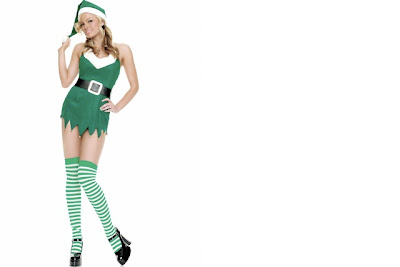 i had quite an interesting, disturbing and ultimately upsetting discussion with a workmate today. it all started with me questioning the validity of a shaver shop ad posted on the sales noticeboard. the ad has a rather plain looking girl, dressed in christmassy red’n’white striped underwear and over-the-knee socks. kinda like our vanilla elf here. but on her back with her legs in the air. an obvious pose for an ad about razors, i thought. apparently it was hott. with two ts.

in asking why the ad was posted there and its relevance to work, a delicate, but important discussion ensued, covering all the fun stuff:

why it bothered me,
why i was kind of militant about such matters (my silly use of the term militant, really)
whether (and why) i considered myself a feminist,
the fact that men think about sex all the time and the obvious need to accommodate that
the validity of being able to look at ‘things of beauty’
the validity of ‘play’ in discussing or accepting sexuality
whether the image was, in fact, demeaning or disrespectful
why the idea of ‘boys will be boys’ is either valid and/or a crock of shit
and – the real corker – whether i had a boyfriend.

one of the reasons i call myself a feminist is to make sure that these kinds of discussion are had. although, if i’m honest, i’d rather not. i’m sick and tired of these kinds of conversations, really. i wish boys would just get it.

but it seems that my nasty feminist views – my desire to not be simply viewed as either mother or whore (or for my sexual identity to even be part of my identity at work, thanks); to be treated with respect and to have equal rights and responsibility – it seems it turns the boys off. and is (probably) the reason i don’t have a boyfriend. well, according to the lovely insinuations that ended the conversation.

i would like to say that i came back with a witty retort, calling into question his not-so-savoury sexual exploits, or his own lack of a girlfriend. but the reality is that the pipsqueak hit a very sore point – one that i had no idea was there until today.

it has had me questioning myself all day, which i think is somewhat important for open-mindedness but something that i really wish i didn’t have to do. it’s obvious to me now, hours later, that my sexual life and/or identity is not actually a prerequesite to my basic human right to be treated with dignity. and vice versa.

but it seems that an age of history – of solely identifying women with their sexual nature, doesn’t shift easily. on either side of the gender divide.

UPDATE: after reading mayhem’s fantastic post about her complex relationship with her own marriage and the need for another feminist revolution, i’ve been reminded that the above idea of being ‘coupled’ as the ultimate validation for my opinions and/or sexuality is fucked.