And that about sums up my life at the moment. There is so much happening, so this blog is going to be a mash-up of crap that you all need to hear about. I could have separated it into clearly defined blogs, but i can’t be bothered, so here goes:

Avian
This is shameless plug #1. My good friend, painter Simon Collins is having a solo show at Canvas Gallery in Surry Hills. It opened last night and having been sick as a very sick thing, i couldn’t make it. Which is really annoying actually ‘cos he’s a good painter and i was looking forward to going to a show of solid work, minus the sweety dahlink factor.

It runs until 21st October at Studio 47, 61-89 Buckingham St, Surry Hills in Sydney and i’m looking forward to popping in there. I haven’t been to this gallery before so it will be great to check out yet another gallery. 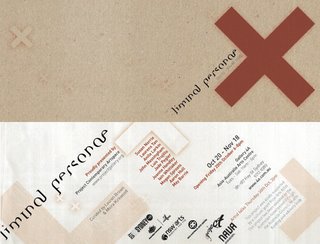 Liminal Personae at Gallery 4A
For those who are regular readers of she sees red, you will know that she, i.e me, has also dabbled in a bit of curating this year, namely a huge project which we got Arts NSW funding for, called liminal personae.

Well, now the show is touring to Gallery 4A in Sydney, which is pretty darn exciting!

A bit of a blurb from the media release:
“This exhibition celebrates the idiosyncrasies of these artists – their particular practices, ideas, concepts, materials, living arrangements, physical or mental circumstances, histories, or lack thereof. The artists involved span a range of disciplines and experience: the curators have rejected the usual practice of showing work by only emerging artists, or only those who have been artists for 20 years or more. This reflects a tradition at 4a of showing the known and the unknown side by side.”

Joanne Handley, one of the artists has a great set of images on her home page

The opening night is next Friday 20th October, 6-8pm at Gallery 4A. For those of you who are in Sydney and couldn’t be assed making it to Wollongong for the first exhibition, you now have no excuse. 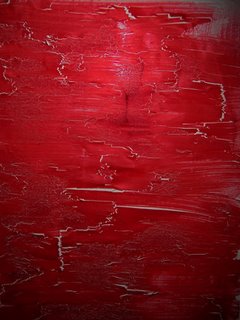 early stages of the decay

Update on Entropy at Platform 2: more red stuff
OK, so it’s about 3 weeks now until I head back to Melbourne (again?!) to install at Platform 2. Following on from Benedict Ernst‘s Chocolate Manifesto, the cabinets at Platform 2 will be transformed into a mass of red chaos and degradation for your viewing pleasure.

All tests so far have been successful and i’ve started a collection of red corn paste detritus. Maybe I should donate some of it to Ella Dreyfus’ red exhibition in a few years’ time!

What will be happening is that Sarah Mosca and I are going down to install, which will be a barrel of laughs. seeing as i have to cook my ‘paint’, i’m hoping to film a mock cooking show as part of the installation too! Coming to a recently sold YouTube near you!

Plans for the closing party include an intimate party like ‘room’ at the end of the space and i’m crossing my fingers that i can get hold of a red carpet for the night! Seeing as the exhibition will have come to the end of its cycle by then, i’ll be displaying the remnants of entropy in small frames and they will be for sale. A little souvenir of death and degradation, say.

I’ve also got a bit of a public mischief project up my sleeve for the weekend of installation as well, so if you’re in Melbourne, keep at eye out!

Culture Jammers Rule OK
And speaking of public mischief, i’ve recently become reaquainted with some cool-as-fuck culture jammers and have decided that when i go overseas, i’m going to go into training to become a fully-fledged culture jammer! i’d do it here, but i’ve got no time, and what with these draconian sedition laws about to come into effect, i’d prefer to not spend time in jail. 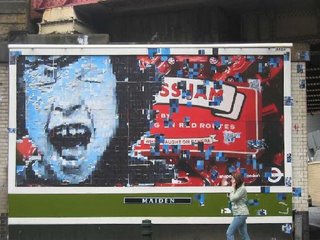 Match Makers
Being in Melbourne last weekend I missed First Draft‘s Porcelain Ball and the first round of forums for their Twentylove celebrations. I had a rad time in Melbourne, and i wish that i could’ve been at the forum – sounds like it was a fantastic time!

One great publication that has come out of it is the ARI Match Makers.

Produced by Invisible Inc (those responsible for Runway, in case you’re unaware), it includes interviews with some of the key ARIs around Australia (MOP, Bus, Inflight and Rawspace), nuts’n’bolts info about exhibiting in an artist-run-initiative (which i would like to pass onto as many artists as i know!!!), a map of the Sydney ARIs (it finally got up off the ground, no thanks to the defunct Artport!) and which i’m hoping that gets reproduced a bunch of times, (although i’d like to see it give a shoutout to the regional kids, Project and Field) and a little bit of a description about what ARIs are, for the uninitiated, or the uninitiative.. ha! get it?.. ouch.

she came, she saw, she conquered. now go check out all that stuff!