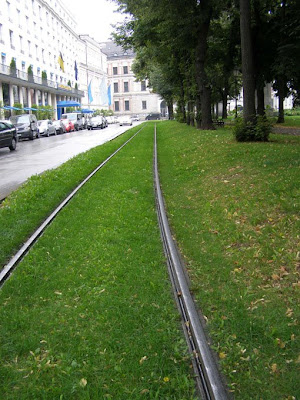 today was a full day of good infostuff. the presentation by anthony mcinnerny about public art in the suburbs and its place there was excellent and highlighted the stereotypes of suburbia, looked at the shopping mall as a interesting public/private place and discussed artistic engagement on freeways. all fascinating.

but the highlight of the day was the discussion about art and public transport. talk about a fucking minefield of discussion! and of course, i was quiet and didn’t utter a word.

• artists’ engagement in developing the system of transport, through design and lateral thinking, as opposed to just adorning or beautifying a failing infrastructure.

• stations as community hubs – which seemed pretty obvious to me, especially after time spent in germany and austria, where of course they’ve embraced their hauptbahnof and you can shop, eat, sleep, drink coffee, surf the web, store your shit, everything there. also discussion about the roles of libraries in stations as a way to implant stations within ordinary social fabric.

• heated discussion about graffiti as art and the money spent removing graffiti. some crazy broad suggested leaving the graffiti on the lines for a year, fostering it and seeing what happens when you allow the graffiti artists’ subculture to self-govern, given that writers have an inbuilt learning process and skill-set heirarchy that is rarely tapped into.

• looking at the role of performance and new media works within transport systems. the grand central station (and possibly flinders st station) freeze as an example, as well as the other end of the spectrum, where you fuck people’s shit up – make it totally unbearable to watch the flow-on effect from that.

• how a distorted art, in the form of muzak, is being used to punish citizens as a result of drug dealing around Frankston station and the idea of resulting alientation from public ‘ownership’ of such a space.

• looking at the misconceptions and preconceptions of convenience within a car-centric culture and whether art has a place in re-educating, or whether other aspects of transport need fixing first.

• ‘anti-social’ versus ‘socially acceptable’ imagery (ie, graffiti, vs paid advertising) and how the use of public space and infrastructure is privileged by consumerism and revenue, rather than by public consensus or common good.

plus some other juicy and faskinating points that i can’t remember right now. it was a really vital discussion and considering that, in victoria, the transport minister and the arts minister are one and the same, it will (hopefully) be an area in which there is far more discussion and development. god knows that melbourne needs some serious surgery in this area.