2010 has some pretty exciting things instore for me. and you. i hope.

one of them is the continuation of my regular wednesday art date with owen leong. i’m hoping that i can be a bit disciplined and write about them each week. you’ll have to forgive the slightly eratic start to the program – it’s sunny outside and i’ve still got that holiday feeling going on. but here’s a little about the first two excursions for the year:

i love jenny holzer. fact. i’ve got bunch of her statements on postcards, loved her running LED ticker tape installation at the Hamburg Kunsthalle and subscribe to her twitter. in fact, she’s probably the only artist who best uses twitter for her practice.

So i was pretty excited to see that she was going to have work here. And i was like a jilted lover when i realised that it was only going to be a couple of works. boo. i wanted a full-on immersion of holzer-love.

however, the work that is at ACCA is pretty damned spectacular.

The first work, which is slightly reminiscent of the Barbara Krueger projections at the same gallery a few years ago, is a rolling projection of text which tracks the entire space. You can lounge on rad bean bag things and have the giant font scroll over you, up the wall and onto the ceiling. it’s a typographer’s wet dream, i can tell you that.

And the bean bags are pretty exciting too. made of a heat/pressure-sensitive material, they leave the impression of your lounging on them once you get up. hyper-colour like. 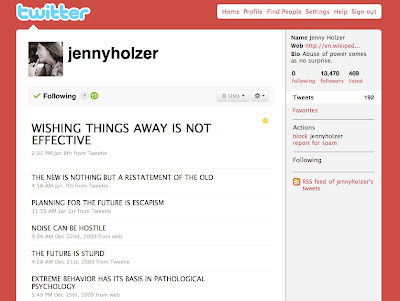 the work in the second gallery hits you in the guts. a combination of text-based canvases and a rotating LED text spiral, it is the transcripts of prisoners’ stories and death reports from Abu Graib. it is painful. it is sad. it is disgusting. it is enlightening.

I love this about holzer’s work. she uses text to highlight the unspoken or hidden words of the disempowered. rather than the usual blah, blah, blah that we usually ignore, she will use text so skillfully to make us sit up and pay attention. and stop picking your nose in the back row there!

one day i would like to see a bigger survey of her work, but in the mean time, this exhibition is an excellent aperitif.

the result of a 3-week residency, this work was a haunting and tragic series of installations which took over the whole gallery. usually split into 3 separate spaces, it was satisfying to see one artist take over the whole space, especially at a time when all the other galleries in town are showing stable/survey/graduate shows.

lawrence’s installations, using sharp lines, wood, metal, lighting and a high-contrast palette are a combination of hany armanious, bernie lubell and christopher hanrahan. they are machines or systems that seem to function, but are actually dysfunctional. they reflect a fracture, a fear or a couldabeen moment, but are so stark and beautiful.

on the closing night, my disco did a performance of their stark and beautiful music, although i had to leave with a shocking headache before they started.