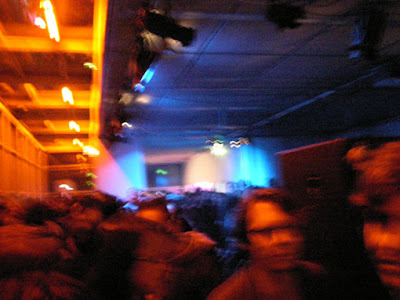 If day 1.5 was all about virtuality and SecondLife, then Day 2 was all about the tactile and the real elements of art/technology and the way in which humans, human nature and human thinking interact with both of them.

I stayed up way past my bedtime again last night, going to OK Party at the OK Centre, which was pretty good. It was absolutely rammed and I ran into 3 artists I knew/worked with from Sydney, which was quite bizarre, but fun at the same time.

So this morning, when I dragged myself out of bed and into the University for a 10:30am start, I was looking way past my age. However, it was well worth the wait. 2 artists whose work I liked the most from the CyberArts festival of the ARS PRIX, Wim Delvoye and Bernie Lubell were speaking in the two sessions on Hybrid Arts and INteractive Arts, respectively.

Wim’s work, Cloaca, is a manufacturing system, based on the human digestive system, whose sole purpose is to generate shit. Literally.

You walk into the room after ‘bowel movement time’ and it reeks! But the system is great! The work showing at Ars is the Personal Cloaca, a washing machine which uses the same enzymes available in washing powder to break down food into faeces [although is faeces still faeces if it’s not from a human? Does it them become ‘manure’ or ‘excrement’?]. The main system uses a series of chemical ‘stations’ to process the food and takes 30 humans to generate 80 kilos of shit. His talk was fantastic, with exactly the right amount of humour, personality and cultural/theoretical insight about what it actually means to be human. If a major part of our physical nature/purpose can be replicated using machinery (that we actually created), what is left to be human? Can we technologise [“hello, Oxford English Dictionary? I think i made up a new word..”] ourselves out of an identity/purpose? 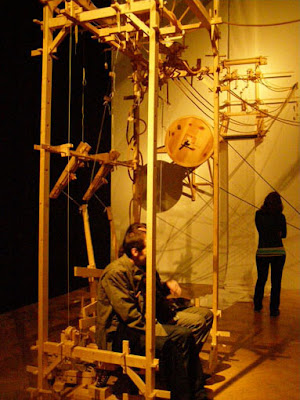 Bernie ‘Blubell” Lubell’s work is a low-fi on the technological material (only because it doesn’t use metal/plastic, but wood), but hi-tech on the concept and interactivity. His pneumatic system called Conservation of Intimacy is a machine powered by a couple rocking on a summer swing, to generate movement of a pen recording seismograph, while simultaneously creating a breath in the ear of a cycllist who is powering the paper on which the seismograph is recorded. It’s bloody brilliant, as are his other works, which he went through in the talk. Similarly, Bernie had exactly the right amount of humour and insight into his own work, where he fits within the Interactive sphere and the idea of ‘control’ – which, interestingly I feel is the basis of privacy, remember?

There were a load of other speakers, including 2 lots of Australian collaborations, represent! but I’m not going to go into them today.

After the intensity of this listening, I popped over to the Ars Electronica Centre and took part in the interactive technology show, which was fantastic fun. There were several great works including: 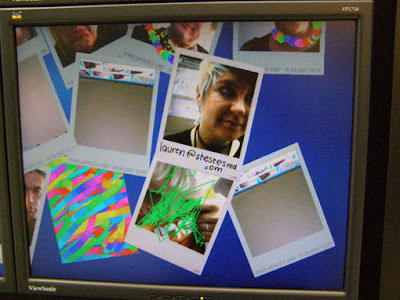 Chalkboard, where you had your photo taken, uploaded and you could doctor it, leaving a note on the virtual ‘noticeboard’. 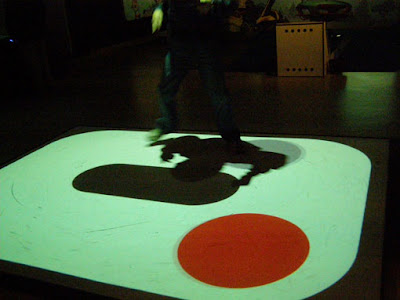 Move, a great responsive game between you and a graphic element. There were 3 games on random selection and I was being ‘chased’ by a red circle, which I found fitting. 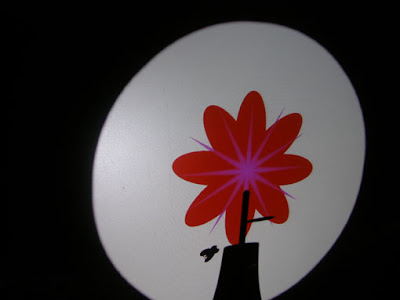 Hanahana, a habit/sensor mapping work, in which you chose a ‘leaf’, sprayed it with the scent of your choice (about 10 to choose from) and you put the leaf onto a sensor pad, which recorded the frequency of the perfume and generated a colour-based flower in response. Interestingly, my flower was red. Seems I smell, as well as see red.

Unsurprisingly, there were loads of kids at the exhibition, which I think is great. Most of these works had a certain level of ‘what does this say about me’-ness to them, which perhaps is the crux of interative work, and I think it’s a vital element to childhood development to be asking those questions early – saves on the midlife crisis down the track.

After the high-tech digital nature of the AEC interactivity, I checked out/stumbled upon the acar2 low-tech analogue interactive exhibition at the Kunstuniverstät, Campus 2.0.

The best part of it was actually the annexe, which had the ‘blogging tag’ badge, which told people you’d been saying stuff about the festival, the ‘wiki/comments section’ – a typewriter on which you could write anything and then leave the paper in there for others to respond to (or not). And the response to the laundry messaging system (boxer shorts on washing line, making words, as seen in the post on Day 1). The return to analogue technology was lovely and their exhibition display was equally cool – lasered lettering out of corrugated card and bubblewrap. 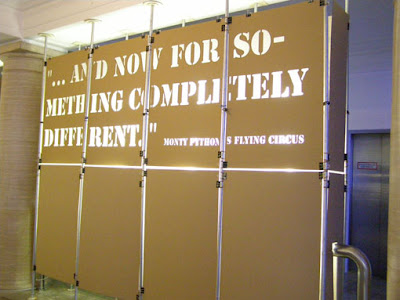 The other cool exhibition was outside the centre, a series of hydroponically-grown lettuces, which were connected via the net to pollution levels of the G7 capital cities (plus Vienna) and had to grow in those levels. It was great to see a representation of our cities sweltering under their own respiration.

The featured artist for the festival is Marko Peljhan and I wandered down to his exhibition on the Danube, which was documentation of a trans-national/nation-stateless project on both north and south poles to develop research centres housing scientists, writers and artists. Although I found the exhibition itself pretty cool (pardon the pun), his talk later in the afternoon was really quite enlightening and proof that artists are vital for innovation across disciplines.

After touching base back at the hostel, I popped back into town to check out the Perfect Strangers concerts at Brucknerhause, the amazing concert hall. I listened to Bill Fontana‘s Memories of Landscape works, a little bit of Masahiro Miwa‘s Bolero by Muamatsu Gear Engine (a Bolero tracking the history of a fictitioius folklore from Japan) and then the main piece I was going for, Frank Zappa‘s Black Page No.1 (that mega drum solo) by The Sancho Plan and his Perfect Strangers/Dupree’s Paradise by the Brucknerhaus Orchestra. All of the above were brilliant and having the sound performance aspect of the festival added a real sense of ‘well-rounded-ness’ [“hello, Lauren, this is the Oxford English Dictionary and I think the word you’re looking for is holistic..”]

And, for those who seem to care about my sleeping patterns, I was very good and home again before midnight, ready for an early start in the morning.