last week i popped over to prahran to check out the luscious ladies exhibiting in a bunch of spaces there. apparently people live south of the yarra, and if you’re one of those people, you should get yourself to see some of these works – they’re most excellent. triumphant and non-heinous, even. 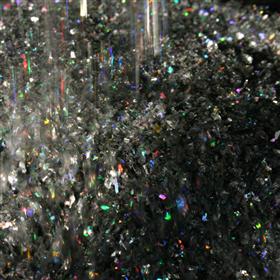 i first came across michaela and her work when i was in sydney – she was on the board at first draft and made an amazing cloud room. more recently, she and kate mitchell hit headlines with their wall work for next wave (which i missed), so i made sure that i went to anna pappas to see her persistent optimism installation – another interaction with the form of water, but mostly through the system of irrigation and perhaps the waste of it that the western world puts up with.

it was such a delightful piece – i giggled with glee as i ran my hand under the spouting silver ‘shower’ – the joy of having a mess, a generator and a working, mechanical, loud work in a commercial gallery also filled me with joy.
i also appreciated the similarity, in parts, of her work to michael georgetti (another anna pappas artist) in the ‘spurting’ of material, which then makes the mark. georgetti spurts paint or wax, gleave spurts silver paper, but they both leave this art-based ejaculate as both the mark and the trace of the process. i think the expressionists would love that shit.

sadly, the work came down on saturday, so you’ll just have to take my word for how rad it was. and if you collect art and didn’t buy it, then bully for you – i hope you missed out. when i make a squillion, i’m going to buy a work by michaela, that’s for sure.

some of you may remember me salivating over raquel’s electronic whiteboard work at the sydney biennale in 2008. i still remember that work vividly. anyway, she’s currently got work at uplands gallery – 2 video pieces that document a walk through a heritage-listed forest, walking through clearfells.

it sounds a bit dull, i know, but as i sat there and watched the 2 pieces/3 screens concurrently, i was struck by the immense beauty of the landscape, the intensity of the walking and the altered spatial viewpoint. i was also captured by the relationship between the birdseye view of the landscape seen in her videos, and the indigenous relationship to country represented through painting.

it was almost like she had adroitly transferred traditional dreaming dot-painting into video format.

i hope that doesn’t insult raquel or indigenous painters, but i really valued seeing the works that way. and through seeing them that way, i was transported to the lands she was walking through. i felt what that forest was like – its damp, cool and pungent fertile cover. and also the fracture of the widespread clearing that is happening.

one thing i was disappointed with was (i’m assuming) uplands attention to the space. in order to darken the front room, they had plastered newspaper across the streetfront windows. it was pretty slapdash and i almost didn’t go in, assuming it had closed up. i don’t really like the new space at at the best of times, so i felt like this was such a dishonour to the space and the work itself. and if it was part of the work, well, it was a bit of an add-on and i would advise against it next time.

however, you have 5 days left to go and see the show, so do. just ignore the closed-up look and soak in the lush atmosphere. 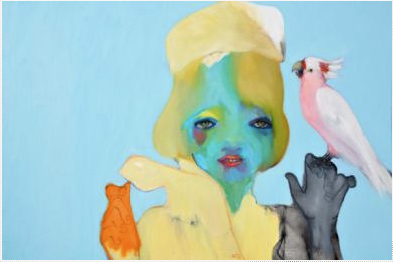 paintergirl has done an excellent review of abbey’s show, cabin fever, over at the vine, but i just wanted to quickly add something to it because i think it’s a superfantastic exhibition.

friends have a stark, black’n’white linear painting of hers in their loungeroom. it’s a beautiful pouty girl with long hair over one eye, and the dark outline is bang-on. i’ve always loved abbey’s line.

so, from that, imagine my surprise and shock at the vivid colour and relatively painterly images that almost hit me in the face when i walked into helen gory.

sometimes i don’t cope with change very well and my first reaction was disappointment – disappointment that her beautiful disegno line had flipped over into the colour tonal range.

thankfully i flipped back pretty quickly. in this series of hostesses, mcculloch has just upped her skills as a painter and has been able to combine the melding of colour, with the detail of line (especially her awesome way of doing teeth and pouty mouths) to make works that ooze the right amount of everything.

in terms of technique, there’s something a little bit francis bacon about them, mixed with an enthusiasm and intense colour palette that bacon wouldn’t have been able to muster even if he ate turquoise.

unsurprisingly, the works (and the drawings in the project space) were completely sold out and i can’t tell you how pleased i am about that. i have a difficult relationship with painting – i love it with all my heart and hate the arrogance which the field continues to display. but painters like abbey mcculloch (who are so over the discussion about painting and just make beautiful works using paint) restore my love in it all over again.

if you have the chance and you don’t go and see this show, you’re a bigger fool than i am.

*i know abbey isn’t from sydney, but i bought a cheap poetic licence for the occasion.

image credits: all images courtesy of the artist and the galleries who represent them. i pinched them from the gallery websites, except michaela gleave – i got that from live guide whilst the anna pappas site was offline.