While waiting for the Helen lempriere opening to open, I trotted up the steps to ANSW to check out the Giacometti exhibition and the Adventures with Form in Space – The Fourth Balnaves Foundation Sculpture Project (which everyone has reviewed, but hey – i’m gonna jump on the band wagon too)

With my NAVA discount, I got a concession price into the Giacometti and after paying almost $20 for the Picasso at NGV last month, $7 to get in was a treat!! It was a lot smaller than the afformentioned blockbuster, but the difference with this one, there was no filler. The byline for the show was ‘drawings, prints and sculptures from the Maeght Collection’ and the only thing that didn’t come under that heading was a print from Margaret Olley’s collection. But I forgive the slight deviation.

I’m exposing my absolute geekness, but the works were all amazing! The pencil drawings and mostly lithographic prints of his analytical drawings were largely that which I had studied most of my degree and used his technique in a lot of my drawings. It was amazing to see the sculptural quality to them plotting out the figure in space, or the object in space. He is the master of making an incomplete drawing look so complete that it was done before it was started.

His drawings and paintings were all about structure. Provide the structure and the form will appear. What a dream boat. Well, actually, I’m not that much of a formalist, but I good smattering of structure and form will really float my boat

The show was clean, concise and succinct. Exactly what I needed. no fucking bullshit. Not too much wall text and NO audio guides! yess!!! exactly what a show like that should be. It’s not rocket science kids – if you want to know more about the artist, check him out on the net, go buy the book in the bookstore, or borrow a book from the library, don’t expect a spoon-feeding – you gotta think for yourself sometime!

After the joy of the Giacometti show, I popped down to the café and treated myself to a chai latté and lemon tart. And boy were they good. But about 2 minutes after getting my treat, fire alarms started going off in the gallery! It was all quite bizarre because I wasn’t sure if they were alarms to start with.. they were quite musical compared to the blare that my work building has to put up with every now and again. So they battened down the hatches and we were kind of stuck in the café. The fire doors were shut off at the start of the downstairs gallery, so I couldn’t check out the Balnaves show, and the other door was at the top of the escalators, so there really was no way out, except to wait.
Or bitch and moan if you were the spoilt teenage princess that was flouncing her way around nearby.

Once all the drama was over and we were informed that it was a false alarm from the kitchen on level 1 (Barry, you burnt the toast again!), I was able to check out Adventures and it was fantastic! Another who’s who of top Australian emerging artists.

Jonathan Jones’ wall of fluorescent lights was actually quite comforting and mesmerizing, John Meade‘s work might have been OK to someone, but didn’t really kick start my heart, Nick Mangan’s work was not nearly as interesting as the one in Uncanny Nature at ACCA and same goes for Hany Armanious’ work: the ‘machine’ looked as though it might have worked, and I liked the allusion to possibility and suggestion of machinery/industry, but the rest of it was kinda.. eh. I did try and make it exciting for myself and blow the candle out on the CC work, but being made mostly of wax and a strong wick, didn’t work. But ultimately, I was kinda bored with his work. And given than I’ve mentioned work by Hany 3 times in the last month, I think I need to see other people.

My favourite works from the show were Claire Healy and Sean Cordeiro’s Self Storage. I’ve liked their work for a long time, despite having serious professional jealousy of them, and was stoked to be able to see the work in the flesh. Their garage of stuff was awesome and invoked all kinds of experiences for me, which I think is a fairly mainstream experience, but you can’t get away from it. I loved checking out the detail, the little clues into their life. I noticed the Will Self book and the big can of Polyester Resin and the milk crates of spray cans. I couldn’t help thinking of Matthew Barney when I saw the Centaur mannequin. (Is is still a mannequin if it’s half mann, half horse?).

I did read in the catalogue how the work was devoid of museological reference – no official catalogue, label, numbering system, but was more like a game of tetris and I liked that idea, although I did feel like being facetious and pointing out the labeling system on the frame: Front End, Bott, Top Right, Top Left.

I had 2 other favourites. Damiano Bertoli’s Continuous Moment sublime appropriation of Caspar David Friedrich’s painting Wreck of Hope. There may be a whole bunch of theory behind it, as indicated by the catalogue, and I appreciate the 3-dimensionality that Bertoli added to the idea, but I just liked the work ‘cos it’s a beautiful appropriation.
Simplistic? maybe, but the first time I saw it at the National Sculpture Award (RIP) at the NGA last year, it actually put the idea of ‘sublime’ into context for me. It made it a contemporary idea (which I guess it is in the current political and social climate) and something I could appreciate the beauty of and come to appreciate the original. That in itself is a worthy pursuit (in moderation). 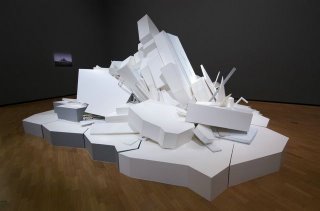 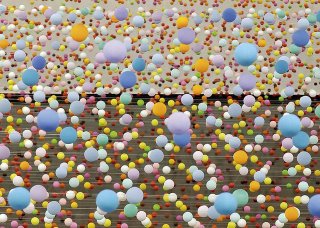 And lastly Nike Savvas’ amazing installation of coloured balls Atomic, full of love, full of wonder was rad as well. The gallery guide kept telling everyone it was ‘the highlight’ which I would dispute, but it was pretty cool. While I was there, the fans were on and the back section of the piece went mad with agitation. It was OK, but it just made me want the whole piece to do that and I actually preferred the stasis of the piece. The chasm of possibility, like the whole piece could move at any moment. poised. Similar to the Ranjani Shettar piece from the Biennale, I could have stood in wonder for ages. And I love a piece that does that for me. When I can, for a brief moment forget about the context of a piece and have some fun with it, see it as a child sees it and drink it in.