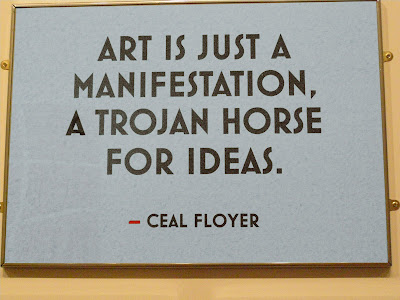 after yesterday’s mammoth post, i have a feeling that reading a whole week’s worth of gallery visits at once is on the boring and tedious, not to mention ugly, side of the blog. i’m going to try posting once a day for the next week instead. let me know what works (if you’re still reading these things).

for some reason, i thought that the chapman brothers were exhibiting the goya works here and although i much prefer their sculptural works, i was amped for a goya/chapman mash-up. however, i must have got it all arse-about and the exhibit was actually a bunch of their sculptures instead. confused? yeah, me too.

the exhibit was a bunch of ‘machines’ with amazingly rad titles and were typical chapman cheek and smut. the mixed media/found objects pieces replicated machinery that reflected the dark side of human desire and motivation. they actually looked like old machines, with systems that seemed logical and a treatment/patina that replicated metal oxidisation. there was something a little Jean-Pierre Jeune about the pieces too and it was hilarious to spy on a very well-dressed, middle class couple checking out a machine that milked penises, was powered by men sucking breasts and lead by a vaginal mouth. ha!

my first impression of the tate britain was that it was quite a wasteland – hardly populated, although i’m definitely willing to give it another go, especially because i was really only there for the Chapman show.

here’s a little sketch of one of the works, just to give you a vague idea as obviously there is no photography allowed (although i got busted photographing the artists’ quotes in the BP British Art exhibit). 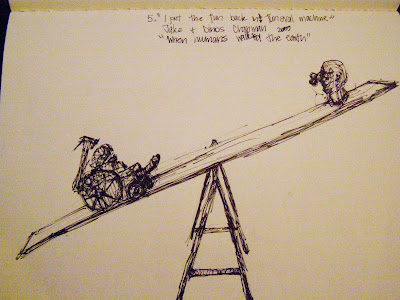 i put the fun back in funeral machine, jake and dinos chapman