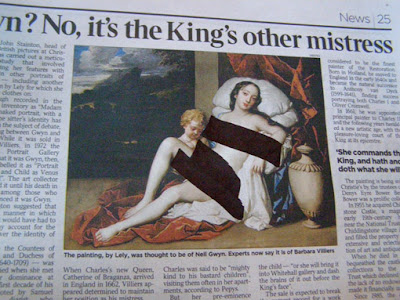 thanks to travel, my gallery visits have been a little outta wack. hopefully we’re back on track.

on my first day in dubai, we visited a small cultural precinct near the museum. this was amazing in itself ‘cos everything in dubai is big. big is better and to go to somewhere that was really quite intimate was damned exciting! XVA is a gallery and cafe, serving delicious local meals at a relatively decent price, plus art works that weren’t too bad. the exhibition on at the moment is student works from the Zayed University. The girls’ work was obviously student work, but it was still pretty good. Either they had a good printmaking teacher or it’s something that the Emirates are good at, but the print works were the best. There were some fantastic artist books and some great aquatint/sugarlift works. I’m not sure if it was ‘cos most of these girls had some serious wasta (influence) or whether artworks are just priced as status symbols, but they were pretty hefty. Thankfully i couldn’t even think about buying them.

XVB, Malekeh Nayiny
Next door was a new gallery, called ave gallery, but known as XVB (being next to XVA). The work in here was much more like work that I like to see. The Iranian artist had done two bodies of photographic works: The first, home sweet home, based loosely on Hansel and Gretel fairy tale, but more focused on the idea of loss/redemption, they featured two ‘children’ on a journey through the desert and with associations of personal struggle. They were great, but the work in the second room was better. Or perhaps more to my liking. Backlit photographic works of ‘street saints’ – mostly Romanian people in Paris posing with a copy of the street magazine L’Itinerant (kind of like The Big Issue) featuring Jesus and his Friends. It had the right amount of kitch, drama, politics and craft to really float my boat.

The gallery is only a month old, according to the gallery assistant and I hope it gets the support it deserves. Contemporary international work in Dubai is few and far between and mostly geared towards tourists or the status-seeking wealthy. I think investigative artwork is only just starting to bloom, but it’s great to see the work that is appearing there.

04.05.07
friday
sharjah art museum, sharjah biennial
sharjah is the next emirate over from dubai. it’s far more conservative and i had to make sure i was appropriately covered. [tattoo]tank girl’s arse could not be seen.

after midday prayer and when the art museum opened, we were able to spend some time going through one of the major venues for this year’s biennial. i’m so glad that my trip coincided with this arts festival. i wish i could say that i planned it that way, but i didn’t. i should have though. 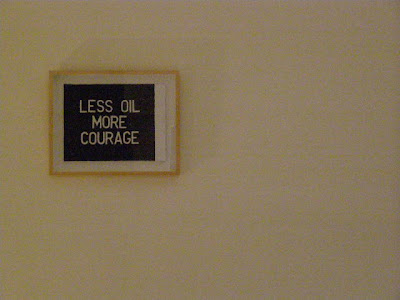 the theme of the biennial is still life: art, ecology and the politics of change – a fantastic theme, especially for the emirates and right throughout the middle east. it’s so charged on all fronts and whilst it’s difficult (ie illegal) to speak out openly against the government and its decisions in the emirates, especially sharjah, the artists have been able to tackle important issues with poignancy and even a sense of humour. as i posted previously, the emirates is one of the biggest building sites at the moment and concern for the environment hasn’t really come into fashion there, like it rightly has in other nations. hell, even basic kerbside recycling is non-existent! the land is being pushed and pulled about and convenience/luxury comes at any cost. i was so pleased to see, though, that it’s not just privileged westerners like me who seem to give a fuck about this, which was a relief.

some of the works from the museum which stood out for me included e-xplo‘s map of sharjah and conversations with workers (grossly underpaid and exploited immigrants helping to building the place), simon starling’s sinking boat – medium format slide documentation of a small steam boat (with its own name, which i can’t remember and didn’t take note) being consumed by itself to feed it’s own power. it was an amazingly powerful analogy that i’m surprised more people didn’t go as ga-ga over it as i did! 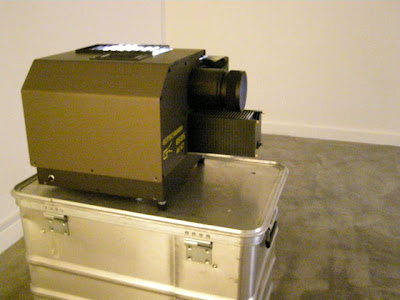 anyway, there were three other major stand-out works for me at the biennial here (and i didn’t make notes of their names, ‘cos i figured i would get the catalogue – not true): Yellow Cow which was an installation of a supermarket style fridge section and the artist had made up ‘yellow cow’ milk and cheese which were “ethically reduced” dairy products, a dig at such wilfull consumption; the humidographic work, which raised the temperature of the gallery over the period of the biennial by 2º and plotting the rise and fall in humidity in the gallery during that time. It was a nice dig at climate change and climate manufacture. The other awesome work i loved was by Michael Rakowitz who created a ‘museum display’ containing replicas of important cultural and archaelogical works that were trashed or stolen when the National Museum of Iraq was looted during the US invasion and fall of the Hussein regime. The works were re-created using the packaging of iraqi products and brands, which was witty but it was shocking to read about the vital clues to history that have been lost forever. It also re-iterated the importance culture has on the identity of a nation. The coolest thing about Michael’s exhibit, though, was not actually the thought-provoking works, but the rockin’ soundtrack of Smoke On the Water played on the oud and other traditional middle-eastern instruments and sung with a lebanese accent. It was r.o.c.k!

so, i really enjoyed the work at the art museum, but once i got to the expo centre, i realised that it had been the poorer cousin. the exhibition in the expo centre shat all over the other one and i was stoked to see some impressive works with a lot more maturity to it. when you first walk in the door, mona hatoum’s globe glares at you in bright neon red and well, i couldn’t help but fall in love with it at first sight. there were a tonne of great exhibits and i don’t have the time to go through them all, but i’ll just give shout-outs to the top-guns:
–mona hatoum‘s globe
–cornelia park – she’s my new best friend right now – loving her work – the fire wood hanging cube, Heart of Darkness and the Noam Chomsky in Massechusetts video. Her third video work wasn’t working on the day, which was a little disappointing.
–sergio vega‘s steel pole orchard with hammocks slung from them
-the overhead sol project was great – thousands of white A4 sheets pegged from lines, which looked like waves, sails, solar panels – gorgeous and calm.
–mounir fatmi‘s video tape city skyline and city skyline tables.
and lara baladi‘s kaleidescope of electronic images. that was fan-fucking-tastic! i could have watched it for hours, but it did my head in.

the other great thing about the expo venue too, was the character of the actual display. the false walls and the scaffolding were still bare, like the guts and structure – the underbelly of the exhibition were still left exposed. i couldn’t work out whether it was from laziness or a desire to express a desire to be transparent and vulerable, but either way, it was a great touch. i think i actually liked being jolted out of my pristine white cube expectations! well, whaddya know.

sincere apologies for lack of details. like i said, had planned to get the catalogue and then realised that it was out of my league, financially.

being a bank holiday, i was a bit suspect on heading into a major tourist gallery, in the middle of tourist centre (trafalgar square) when everybody was out and about. surprisingly, it wasn’t actually too bad. i didn’t want to spend ages there because i’ve made a decision to go to the national gallery once a week for the six months i’m here. so, in preparation for that, i just did a quick squizz around the collection. i didn’t go mental, managed to hold back on falling in love every 5 seconds and oriented myself. i have a feeling i’ll be spending a lot of time in the reubens room, the italian room and the picasso room.

in keeping with the idea of living in the gallery, i was stoked to be able to see the leon kossof drawing show. kossof, as well as auerbach and bacon, is one of my favourite brit post-war boys and his methodical craft of drawing from the national gallery collection is one which i not only admire, but can see the benefits of. my old painting teacher used to go on about leon’s habits in front of the collection and i see why.

the etchings were actually more engaging for me, with sharper lines and richer blacks, but the structure and study in the drawings really reminded me why i love drawing. the national art school drawing department instilled in me a love of this kind of investigation and standing in front of years’ worth of “looking and putting” all made sense.

there was a little video that accompanied the exhibition, which was informative to a degree, but i felt like Colin Wiggins was just reading from the catalogue. I would have liked to hear from Leon Kossof himself, and while Ann Dowker, his friend and printmaking master was informative and engaging, it wasn’t quite as good as it could have been.

I left the gallery only have spend £1.40 on a cup of tea, but have plans to save up my pennies (literally) and buy a whole bunch of books from the shop as a treat, once a month. well, that’s the plan at the moment – we shall see once i start joining the masses of the underpaid antipodean.