having spent the better part of the week actually concerned with finding a place to live and a job to go to, my gallery visiting was not quite as deep as it has been in the last couple of weeks. you’ll have to just forgive me.

in some nice news, i’ve decided to make a separate blog for a gallery per day. i’ll post a ‘new gallery per day post’ each week on here when one goes up, so you can still keep up with what’s going on. i’ll also be trying to improve my grammar, spelling and language on there, because i’d like to take that element of my writing a little more seriously. don’t worry, i’m not having a complete personality transplant, just a little bit of a tone down, so that if grown up publishing-type people want to take it up, they don’t have to freak out about offending the kiddies.

I popped into Riflemaker because I had been enjoying a very yummy coffee at flat white and it was around the corner. I was pleasantly surprised to be presented with a John Maeda exhibition. I had heard of Maeda, but not quite registered it, so was pleased to be able to acquaint myself with a name that seems to be well-regarded in tech-art circles. I wasn’t 100% enamoured with the exhibition – the text boards and the random op-art pespex reliefs were a bit random for me, but i did totally love his ipod works. There were 2 works in particular that were sharp as tacks and I would have loved the whole exhibition to be like this. But sometimes I can be greedy.
The first ipod work was an ipod video that displayed a screen that replicated the old-school Apple green screens and ‘played’ a logic code ‘conversation’ along the lines of:

I LOVE IT WHEN YOU TALK TO ME LIKE THAT
?SYNTAX ERROR

When i was in high school we learned very basic code like this to play very basic games and draw very basic images. This contemporary chat between technological machines was amusing and poignant at the same time. I was pleased that superceded systems and machinery were given a nostalgic place by Maeda.

The other ipod piece that I loved was a relief sculpture framed in a beautiful box frame. There were 16 white ipod nanos piled in a fan-like shape, all running different films of passing scenery, abstract and colour-based work that didn’t seem to relate to each other, but I think that was the point. It was such a beautiful moving colour field object.

The other exhibition at the gallery was the photographic work of Anja Niemi, whose eery photographs of ghostly girls in abandoned spaces were very beautiful, well photographed and reminded me of Emily Portmann whose worked got snapped up by Sullivan & Strumpf as a graduate. This may sounds like I’m saying that Anja’s work was ‘so undergrad’. That wasn’t the intention, but it was quite single-minded. I could have bought one (the one of the girl in the bath), and for regular readers of these weekly ramblings, you’ll know that while it doesn’t necessarily mean a lot, it means something. Especially ‘cos I don’t have any money to buy one.

I decided to mix up my usual pattern this week and take advantage of late opening hours on Wednesday. Although I didn’t actually stay until 9pm, there wasn’t the feeling of pressure to leave that usually happens when i find myself engulfed in the National’s collection. For good measure, I met both Charles and Young Will there today and while I was quite a crap gallery guide for Charles in the first instance, once Will arrived, we all found ourselves having fantastic conversations about all kinds of stuff, while slugging tea in the National Café. It was so acceptable, it was unbelievable. Stuff geek girls’ dreams are made of.

While i was quite ambivalent about most of the Italian painting in rooms 62-65, I did arrive at Sandro Botticelli‘s Venus and Mars and spent quite a while drawing it. Getting Venus’ proportions right wasn’t easy, but once I got it, I really enjoyed it. I could really converse with the seraphims playing havoc with Mars’ war paraphernalia (helmet, staff), i loved drawing Mars and his raised knee and the curve of Venus’ body (through the sheer drapery) was lovely. While Boticelli has left me cool in the past, I can see why the boys and girls love him. Here was the beginning of the rennaisance and it was oh so sexy and completely legit. Sexual subversion, advocated by the church? Better than Eastenders anyday. 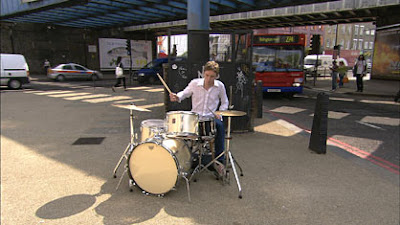 Annika Eriksson, The Soundtrack
Thanks to the Cubitt Gallery

Tucked in behind Pentonville Rd, Cubitt Gallery is a fantastic artist-led-space, attached to studios. I felt right at home in the place that was raw, with concrete floors and an industrial feel. The video work was really quite good. I don’t often feel like standing in front of a video piece for longer than a few seconds, but i stood in front of this one for a while. It’s an image of a drummer on the street, just playing on his own, to either his own internal rhythm, or the rhythm of the street. Or maybe a bit of both. I have a connection with rhythm and I was fascinated by the representation of someone else’s – both obvious (drums) and more subtle (traffic, citylife, solitude).

Regular readers will be wondering what happened to going to Tate on Thursdays, but I decided to go for a Friday this week for the same reason I shifted the National – late openings means i can just drift in there. And when I start working [which i have], i can still go to the Tate easily after work and spend time there.

If I thought the States of Flux section was crammed, boy was I in for a surprise in Poetry and Dream. There was one room there which was seriously jam-packed full of Surrealist works. After going to Surreal Things at the V&A last Friday, this show was a nice compliment to that. Giorgio De Chirico‘s work was the first thing in the room and it was so, so exquisitely painted, that I just stood in front of if for ages. The form of the classical sculpture was so perfectly rendered and there was just the right amount of disegno(form through drawing) and colori(form through tone) to provide absolute harmony. Unsurprisingly, I saw an artist sketching it when I was on the way out.

The exhibition covered such a range of (mostly) Surrealist and Dada works and what was fantastic about it was to hear the conversation amongst patrons. The images and style of symbolism/imagery is so much in the vernacular that whilst people didn’t quite know what was being said, they felt they had the right to discuss it, which I think is absolutely vital. I was really aware of the dynamic of visitors during my visit and I would have to say that Poetry and Dream had the most visitor engagement thus far. The Joseph Beuys ‘Stag..’ installation got the least understanding/most fear, which was completely balance by Cy Twombly‘s large scratchy paintings of Quattro Staggioni (Four Seasons). Well done, Tate.

I was pleased to see some more Magritte works and totally loved this quote from a wall plaque:
“.. the subtle undermining of the everyday was characteristic of Magritte and his Belgian Surrealist colleagues, who preferred quiet subversion to overt public action.”

And speaking of subversion, Marcel Duchamp is one of the single most influential Dada/Surrealist/Installation Artists in the modern era, apart from Pablo Picasso (IMHO) and while I appreciate the method behind scattering his work amongst all the exhibits, I really, really want him to have his own room. His subversion and his proliferation were so far-reaching that it feels like he gets lost among his colleagues. I managed to put something like this on my little postcard drawing I did as part of the kids program (OK, so i’m old enough to have children, but that doesn’t/shouldn’t stop me), but I’m not sure whether that makes much of a difference, really.

In fact, while drawing my Tate postcard, I had the nicest time chatting with a couple of younger Tate patrons about the collection, which was just delightful, and something I thoroughly recommend.

I spent all day running around North London looking for a place to live and applying for work. I didn’t feel much like going to a gallery by the end of it.

Mark Wallinger, State Britain
Thanks to the Tate website

So much has been written about this work (rightly so), by Turner Prize candidate Mark Wallinger, that I’ll just keep it brief. In fact, I’m going to focus on the Talk with the Artist – a video that is playing in a small nook on the ground floor, which is Mark taking you through the work and the impetus and feeling behind it. It was incredibly enlightening and while I usually prefer to leave the Introduction until last, i really appreciated it. He discussed the piece being transformed into an authenticated ‘object’ by being in the gallery, rather than an ‘eyesore’ sitting outside Palace of Westminster. He discussed that for certain conservatives, this work now has validity because it has been recreated by an Artist (capital A), as opposed to a passionate protestor, Brian Haw.

While the work was a little obtuse the first time I saw it, the concept of it began to sink in and I really enjoyed poring over the way in which such basic forms of communications – hand-made signs, raw wood, grubby material and greasy tarpaulins – have been ‘recreated’ using artistic means.

After checking out State Britain, I had a quick peek in the Modern Figures section of the Modern Britons section and was wildly disappointed. There were only a small handful of interesting paintings, including a self portrait by Gwen John and some of the daily scenes by Walter Sickert. I haven’t seen other parts of the Modern collection, but I was really surprised that, in terms of figures, that Frank Auerbach and Lucien Freud, are missing. Surely they are Modern figurative painters. Perhaps they’ll show up elsewhere and I can safely report that British Art is in safe hands. If not, the Brits are being seriously under-represented in their own gallery.

I stumbled upon this gallery, while on the way to catch up with Helen. While the space was not particularly welcomming, the show was slightly interesting. In particular, a work by chinese artist Yuan Tian. Up on the mezzanine, there was a bedroom setting and the duvet/doona cover was printed in red writing in English “Hey, make yourself at home!” and Chinese script of the translation “Get the fuck off my bed, I just changed the covers!” (paraphrase). The Welcome mat was also in both English and translated in Chinese as “Take off your bloody shoes”.

As a recent visitor, running into my own version of English translations (ie. Thankyou, can mean, Why don’t you just fuck off!), I really appreciated the idea of culture clash and miscommunication. The rest of the works, looking at an east asian perspective of living in London was a refreshingly familiar inquiry and to be admired.

Next week, galleries I’ve got on the list include Jeff Koons at Gagosian, Damian Hirst at White Cube, Cindy Sherman at Sprüth Magers, Old School at Hauser & Wirth and hopefully the Design Museum (which i’ve been meaning to get to for weeks now).

EDIT: Sorry about two mega posts in a row. I promise I’ll post something light-hearted and whimsical next.