i promised myself that i would start this, and like someone in the blogosphere said, if you say it online, you usually do it.
i think i’ve done pretty well so far. so, in the last week, here are the galleries i’ve managed to pop into:

i made a very special effort to get to the david shrigley show at kings. it finishes after i leave and i’ve fast become a huge fan of his work. i’m usually not into the naive/cutesy/fluffy/über cool trend that is sweeping (australian) contemporary art at the moment, but for some reason, david shrigley cuts through all of that patronising crap and makes some fantastic works. actually, they’re not works. they’re statments. they’re heavy on the text, but the text is so beautifully chosen/written, that i mostly end up doubled over with laughter.

the show at kings was just a small poster show and the movie (with chris shephard) called who i am and what i want. think the lovechild of harvey crumpet mixed with william kentridge. it was great! other highlights from the show included posters with the following hilarious texts:

And is having a party.

(maybe the infamous ad agency mother?) and then these priceless ones:

LOST
1 soul. mostly transparent. does not answer to the name of jacob. expressed an interest in inhabiting an inanimate object rather than me.
last seen whilst kissing ass for recent promotion.
if found call 571274118

Attention
A messge to anyone who will listen:
Joanie Hardie
will leave her job
“because it is totally rubbish”
and
“leaving such an awful job will be a sweet release”
as of very soon she will not work at:
ACCELERATOR
part of the media initiatives group
And her contact details will no longer be::
T. 0207436 4600
F. 020 7631 3122
(It will be some other poor fool who answers the phone)

* i think shrigley must hang out in marketing/advertising circles, ‘cos there were heaps relating to the adverset.

this photo taken in euroa: 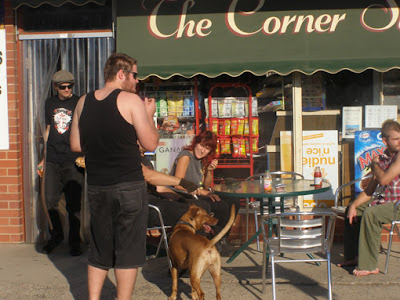 OK, so this is a bit of a cheat ‘cos it’s my own show, but hey, it’s my blog.
I’ve written about Installation Week before and this was nothing like it. It was so damn easy. Becky from Kudos is ace – she helped us out so much. And Sarah Mosca is a fantastic curator and she had everything so damned organised – it was a breeze.
I arrived feeling a bit stressed, having been a gypsy for the last 3 weeks and it was starting to take a toll. Sarah put my mind at rest straight away without being patronising – a skill I’m grateful that she has. I was also a little anxious because my kinetic work was in a state of disrepair – the motor was falling off the casing, the casing had been bashed a little in transit and I had to do some open-heart surgery. However, after some food and some furtive concentration, I got it to work. Quite well I thought too.

The rest of the work went up pretty easily in the afternoon, with the most frustrating aspect being the mural on the feature wall and the OH&S elephants from UNSW that came traipsing through the place. That was until the rain came, then it was a frantic game of protecting works, finding buckets, trays, anything to catch the water in. it was coming down in sheets and there was no end in sight – rain predicted for 3 days. some of us panicked. some of us stayed calm.

Finished up at about 7pm, leaving Sarah, Dave and Tim finish up some of the finer points of installing.
I think i like being in a group show like this, minimum stress really.

UPDATE: to the person who bought White, Red: I hope you enjoy it. Thanks for supporting emerging contemporary art.

Checking out a gallery per day isn’t all about going to the cool and groovy ones. It’s about being fair. So in the interest of fairness, I popped into Charles Hewitt Gallery, in Paddington. The entrance to the gallery was an experience of itself, with a classy auto sliding glass panel, a beautiful chaise l’ounge and ambient classical music.Ick. The work they had exhibition could easily have been tarred with ‘shit’ and left it at that, but I actually had deeper thoughts and feelings about it. Fortunately or Unfortunately.
The paintings were detailed images of Australian landscape. I’m not sure where the artist is from, but a lot of the images reminded me of the rock ledges and cliff faces of the Royal National Park where I used to spend a lot of time on my mountainbike many moons ago. While I felt that some of the colour-work of the paintings could have been amped up and the details of the paintings strangled them a little, I did actually appreciate the works as a reminder of quintessentially Australian terrain. Usually the terrain here wouldn’t register on my ‘things to get excited about’ list, but because I’ve been in transit and about to head for Ol’ Blighty, I’m aware of the aspects of this country that I’m especially fond of, or are particularly unique to here. These works fulfilled that for a moment. While I wouldn’t buy one, I could see why someone might and it was nice to broaden my perspective about it for a moment, instead of casting immediate aspersions.

No main galleries open. although I did check out the windows of slot gallery, a window space gallery in redfern, sydney. they had two really beautiful painted catholic icons on tin panels from artists on an island in the phillipines (which i can’t remember the name of, sorry).

there were also some pictures of the panels in situ and some small sculptures which belonged with them, but I was really taken by the panels. they’re reminiscent of historical religious tempera paintings – raphael and giotto came to mind. They were quite special and even taken out of context, still engaging objects.

26.4.07
thursday
no gallery today. mooched around at home.

27.4.07
friday
made up for yesterday’s slackness by checking out 4, yes 4 galleries.

NGV, flinders st, melbourne, joseph brown collection
with 20 minutes to spare and an unwillingness to pay $15 for the australian impressionism show, i popped into the gallery showing the dr joseph brown collection. this was a goldmine and i’m hoping i can squeeze in a chance to quickly check some more of it out down the track. brown recently donated 450 works to the gallery and the gallery will have it on permanent display. the collection includes works from the who’s who of australian artists worth giving a shit about. names to drop: eugene von guerrard, conrad martens, e.phillips fox (my new fav aussie old school painter), mc cubbin, nolan, drysdale, streeton, miller, tucker.. and that was just the ones i saw.
i’m hoping that when i go back i see a few more of our stellar gals in there, like hester, beckett, black, preston, etc. but if you’re in melbourne, you need to see this show. i know that europe has a depth of art history that we don’t even come close to, but this collection gives you a good sense of what is our art history in this country and i have to say, i left with a bit of pride. (that i’m sure will be crushed the minute i walk into the tate)

citylights until never gallery, off hosier lane, melbourne, curvy artists
on the way to check out mike parr’s exhibition (see below), i was snapping away in hosier lane, when i stumbled upon until never gallery. i had never heard of it before, so decided to check it out. it was up a couple of flights of rickety stairs and at one point i remember thinking that maybe it’s some cruel ruse. anyway, got to the top and there was quite a large, open room with mounted prints on the wall of a range of fairly girly artworks. i recognised them from the new curvy mag that’s out now. these, combined with the lightboxes in the lane were an added bonus to the publication of the artworks. seeing them brought up an interesting point about validation of artworks for me. i would have been quite happy to just be published, but i guess having a limited edition print produced, means you can sell it and someone can make some money somewhere along the line. while the prints left me a little ‘meh’, the customised adidas zip-up jackets did pique my interest. i thought they were a pretty cool idea! they were all on white jackets with gold stripe and i had the feeling that someone at adidas went – here’s a dud line, here girls, paint on these! but it did remind me that customising sports wear with artists is cool. just check out the sneakerpimps for proof!

anna schwatrz gallery, flinders lane, melbourne, mike parr
i haven’t been into anna schwartz before, but i’ve been keeping an eye on her stable for ages. i’m so glad i went in there. it was like no gallery i’ve ever, ever been in before! it is the most white cube gallery i’ve seen in australia and it’s so severe it’s awesome! i know it’s not for some, but i totally loved it! it’s a space where i felt that anything could happen there, but not in a homely way, but like an out-of-the way in the desert kind of way. the depth and hollowness of it is awesome.
and although mike parr is one of my favourite australian artists – i’m responsible for the ‘better than sliced bread’ quote that was kicking around about him a while ago – this work didn’t grab me quite as much. it reminded me of a george gittoes/albert tucker love child (which is a very, very scary thing). but what i did like was that he was working with medium/substrate that i hadn’t seen him work with before. and the shelving that he had cast was fantastic – a big, dirty, black, scuffy, ominous monolith sticking out from the wall. i heard the darth vader theme in my head as i looked at it.

platform2, degraves st subway, melbourne, making space [and book launch]
it was strange going to the opening at platform tonight. i only knew 2 people – din and anita from platform. and while that sounds pretensious, it probably is, but i’ve become accustomed to going to openings and knowing at least a couple of others there.
the opening was the launch of making spaces, a book and state-wide focus on artist-run-spaces in victoria. the victorian galleries have a far greater solidarity and community with each other than the NSW ones do, and it was nice to watch people from a variety of spaces working together for this event. the whole program has been made possible through federal and state funding and the big wigs were there – including the federal arts minister, the director of the visual arts board of ozco and a swag of others from arts victoria. read: big fucking deal. i didn’t feel comfortable enough to stick around for the speeches, but i did sample the fine sushi, the real orange juice (are you reading people – orange juice is what i like to drink at openings! just ‘cos i don’t drink alcohol, doesn’t mean i don’t like flavour in my drinks too!) and checked out the great show of works in the cabinets. it gave me a few great ideas for next year too. i bought a book and then scooted off. knowing that i would gradually get to know people at a later date, hopefully.